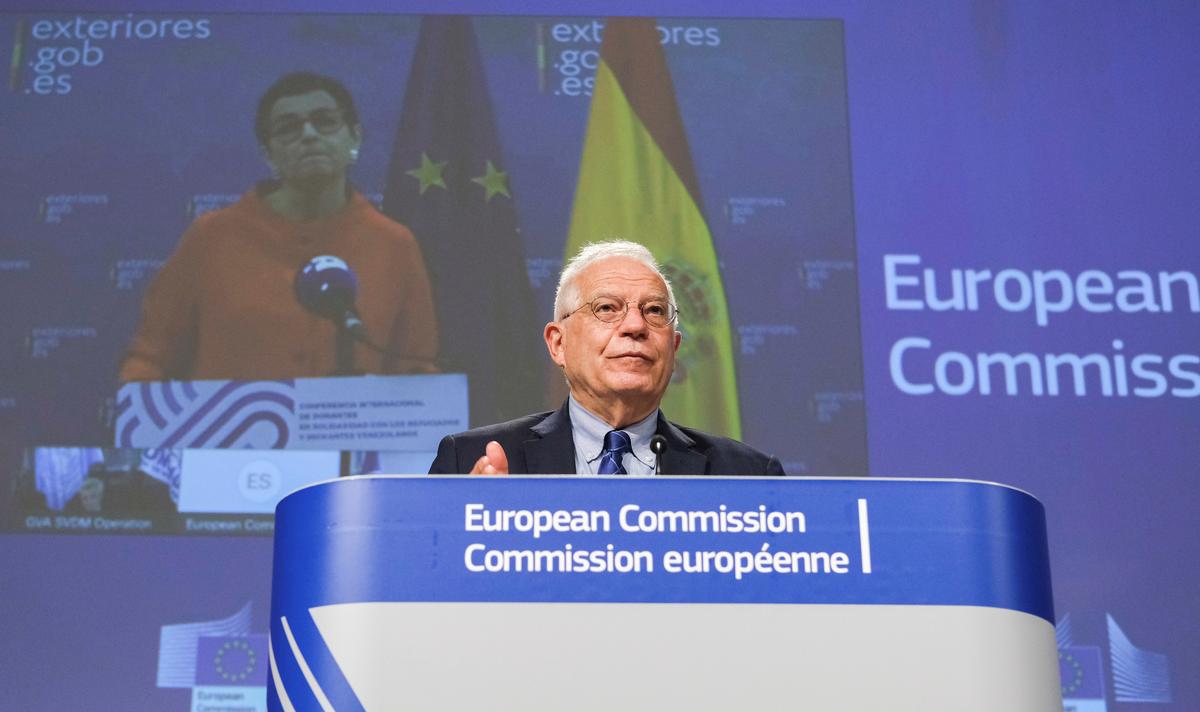 BRUSSELS (Reuters) – More than 60 countries on Tuesday pledged some $3.4 billion in emergency aid for five million Venezuelans who have fled the country to neighbouring South American nations to escape economic collapse under President Nicolas Maduro.

European High Representative of the Union for Foreign Affairs, Josep Borrell, and Spanish Minister of Foreign Affairs, European Union and Cooperation, Arancha Gonzalez Laya are seen during a video press conference at the end of International Donors’ Conference in solidarity with Venezuelan refugees and migrants in the countries of the region, in the context of the coronavirus pandemic in Brussels, Belgium May 26, 2020. Olivier Hoslet/Pool via REUTERS

Venezuela’s unravelling is one of the world’s worst humanitarian crises and has been worsened by the coronavirus pandemic as healthcare and water supplies are out of reach of many people.

Despite rising social tensions in Venezuela, thousands of Venezuelan migrant workers are seeking to return home from countries ranging from Colombia to Chile as jobs have evaporated in host countries during the COVID-19 lockdowns.

“The plight of Venezuelan refugees and migrants has worsened even further,” U.N. High Commissioner for Refugees Filippo Grandi told a pledging conference organised by Canada, Spain, Norway, the European Union and the United Nations, held by videolink and broadcast on YouTube.

“The impact of COVID-19 is dramatic for countries across Latin America and the Caribbean and has pushed the Venezuelans living there into a spiral of poverty and despair,” he said.

Spanish Foreign Minister Arancha Gonzalez said there were $2.79 billion in total contributions by governments and development banks, and $653 million in donations.

“Venezuelan citizens…, you are not alone,” Gonzalez said.

Venezuela, in meltdown despite having the world’s largest proven oil reserves, has 1,177 confirmed cases of COVID-19, although U.S.-based Human Rights Watch said the real number was surely higher because of a lack of testing, urban overcrowding and the Maduro regime’s harassment of doctors and reporters.

Charities and non-government organisations also cautioned that emergency COVID-19 support for nations hosting Venezuelans should not reduce foreign aid schemes for those who are most vulnerable to the pandemic.

“The response to COVID-19 should not jeopardize the ongoing humanitarian response,” Caritas Europa Humanitarian Director Silvia Sinibaldi said. “The combination of the two crises exacerbates the existing vulnerabilities of Venezuelan migrants and refugees.”