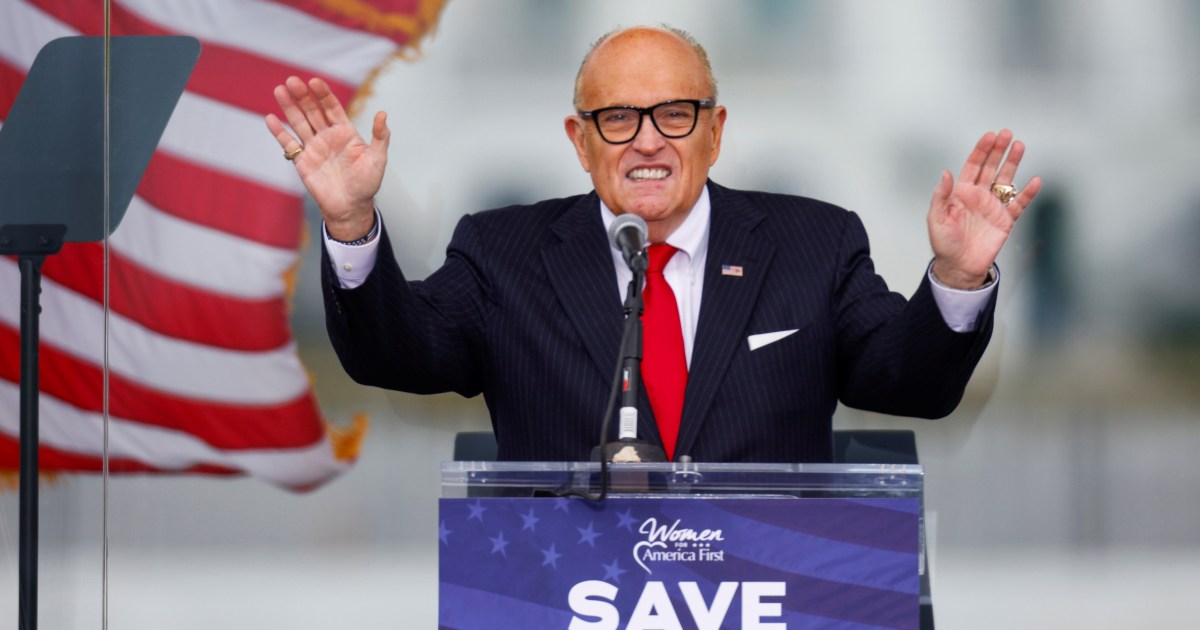 Dominion’s defamation suit against Giuliani comes after the bogus conspiracy of election fraud helped inspire a deadly insurrection at the United States Capitol on January 6 following a rally at which Giuliani and former President Donald Trump spoke [File: Jim Bourg/Reuters]

Donald Trump’s lawyer Rudy Giuliani exploited false election-fraud claims to hawk gold coins, cigars and supplements on a podcast, according to a $1.3 billion defamation suit by a voting machine company.

Dominion Voting Systems Inc.’s lawsuit, filed Monday in federal court in Washington, may now force Giuliani to defend his actions in spreading what the company says are bogus claims that it helped flip millions of votes to President Joe Biden and cost Trump a second term in office.

“He and his allies manufactured and disseminated the ‘Big Lie,’ which foreseeably went viral and deceived millions of people into believing that Dominion had stolen their votes and fixed the election,” the company alleged in its complaint.

Dominion previously sued former Trump campaign lawyer Sidney Powell for defamation, after she led the charge against the company by claiming foreign enemies had infiltrated its voting software as part of a vast conspiracy. She hasn’t yet responded to that allegation.

The suit against Giuliani, who sought to charge the Trump campaign $20,000 a day for legal work on election-related lawsuits, comes after the bogus conspiracy helped inspire a deadly insurrection at the U.S. Capitol on Jan. 6, following a rally at which Trump and Giuliani spoke.

‘Not a Fraud Case’

“Even after the United States Capitol had been stormed by rioters who had been deceived by Giuliani and his allies, Giuliani shirked responsibility for the consequences of his words and repeated the Big Lie again,” the company said.

Others may also be sued for attacking the company – and, it claims, trashing its reputation – by repeating conspiracy theories to explain Trump’s failed bid for a second term. Giuliani, Fox News and the White House itself were among those who received letters from Dominion’s attorneys in December.

In its new complaint, Dominion said the former New York City mayor spoke frequently about the false conspiracy in public settings but declined to make voter fraud claims in court where he’d have to prove it. In one Pennsylvania hearing, Giuliani admitted that the Trump campaign “doesn’t plead fraud” and that “this is not a fraud case.”

“He was unwilling to make false election fraud claims about Dominion and its voting machines in a court of law,” the company said.

According to the suit, Giuliani touted false claims about Dominion while marketing gold and silver coins on his YouTube show in December, saying, “I accomplished a lot in 2020, exposing the truth,” and warning viewers that in uncertain times the one thing they can count on to protect their finances “is physical gold and silver.”

“He recommended that his viewers buy gold from ‘the company you can trust’ and told them to ‘give them a call and tell them Rudy sent you,’” according to the complaint. “And, Giuliani advised, ‘if you call them right now, they’ll give you up to $1,500 of free silver on your first order.’”

Dominion said the lawsuit is needed to “set the record straight, to vindicate the company’s rights under civil law, to recover compensatory and punitive damages, and to stand up for itself, its employees, and the electoral process.”

(Updates with details from the complaint.)