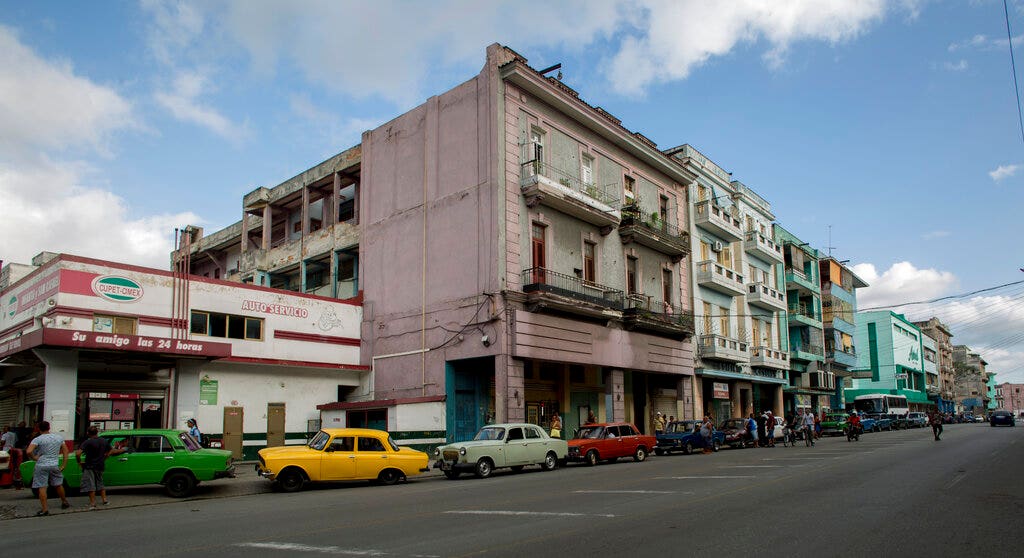 A fuel shortage blamed on the Trump Administration has turned filling a tank in Cuba into an ordeal even for a country used to waiting in lines.

Around Havana, drivers spend days hunting desperately for gas, calling friends and updating online chat groups with sightings of diesel, regular and higher-octane fuel at gas stations. Lines this week have come to stretch for blocks with waits up to five hours long. Drivers park and shut off their cars to wait in the shade and chat with friends as cars crawl past pumps far in the distance.

Increasingly, gas stations are running out with people still waiting in line. Drivers have started lining up outside empty gas stations in the hope that a truck from the state-run fuel monopoly will come by to fill its pumps.

Cuban officials blame a U.S. policy of sanctioning ships that bring petroleum products from Venezuela, Cuba’s main ally and source of highly subsidized fuel for two decades. Outside observers say the broader cause is Cuba’s energy overdependence on a single socialist ally whose oil industry has gone into freefall. Cuba relies on Venezuela for about 60 percent of its daily consumption, according to some estimates.

‘SONIC WEAPON’ USED ON DIPLOMATS IN CUBA MAY HAVE BEEN PESTICIDE, STUDY FINDS

“Once again they committed the great strategic error of putting all their eggs in one basket,” said Jorge Piñon, an expert on Cuban and Venezuelan energy and economics at the University of Texas. “They didn’t learn the lesson of the ’80s when they depended on the Soviet Union without an insurance policy protecting them from political changes.”

Vehicles wait in a line to fill their gas tanks, in Havana, Cuba, Thursday, Sept. 19, 2019. A fuel shortage blamed on the Trump Administration has turned filling a tank in Cuba into an ordeal even for a country used to waiting in lines. (AP)

Whatever the cause, the result is an energy shortage that’s crippling Cuba’s already slack economy and forcing people to spend much of their week worrying about how to get around.

“If I don’t manage to fill up now all I have is enough to get home and park my car,” said Karel Perez, a 44-year-old restaurant employee.

Interminable gas lines are only the most visible sign of a fuel crisis that’s led to cutbacks in public transport, public services and every sort of state-run business in one of the world’s last centrally planned economies.

Train and bus service has been cut back, state employees are working half days and farmers are being asked to use oxen to pull plows instead driving tractors. Police have been posted to bus stops and gas stations to control the long lines. Public employees with state-owned cars have been told to pick up hitchhikers, a measure enforced by public inspectors last seen during the infamous economic crash known as the special period following the collapse of the Soviet Union. More broadly, the country has been suffering months of intermittent shortages of basic products like soap, detergent and, for a while, chicken, due to a lack of hard currency to buy imported goods.

A drives pushes his vehicle to a gas station in Havana, Cuba, Thursday, Sept. 19. Increasingly, gas stations are running out with people still waiting in line. (AP)

Problems with public transport became obvious this month, leading to widespread discontent among Cubans. On Sept. 11, President Miguel Díaz-Canel announced that the country had to cut back its use of petroleum products, particularly diesel, due to a shortage of tankers he blamed on U.S. sanctions. Since then, gas lines winding for blocks have become a feature of the landscape in Havana and around the country.

The government says the arrival of tankers in October should relieve the situation somewhat, but many Cubans remain worried.

“Since public transport has gotten bad I try not to go out and I walk to work,” said Jacqueline Pereira, a 35-year-old state employee. “People are tense.”