Posted By: World Tribune 8 months ago 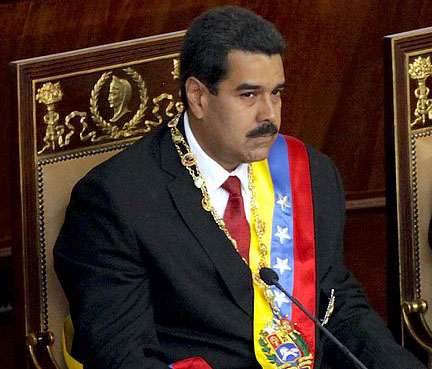 Because China is a major supporter of Venezuelan dictator Nicolas Maduro, travel between the two countries is common and that has officials deeply concerned that the Wuhan coronavirus could make its way to Venezuela and devastate a country that has no real healthcare system.

The Venezuelan Red Cross was highly critical of Maduro’s coronavirus preparedness and noted the dire state of what remains of the country’s socialist healthcare system.

“We are calling for the prevention of the coronavirus. We are not ready to fully combat this disease. This is something that the Health Ministry has to prepare. Neither the medicines nor the treatment necessary are here,” Venezuelan Red Cross president Mario Villarroel said last week.

In socialist Venezuela, there are chronic shortages of medicine, electricity, and water.

Frances Martel noted in a Feb. 5 report for Breitbart News that nearly every medicine on the World Health Organization’s (WHO) list of necessary, basic medicines is no longer available.

“Vaccines are also in short supply, resulting in outbreaks of diseases Venezuela had eradicated before socialism, like malaria, measles, and diptheria. Patients living with chronic diseases like diabetes or HIV have little to no access to necessary treatment,” Martel wrote.

It would also be impossible for hospitals in Venezuela to know if the coronavirus had reached the country as they do not have testing kits, said another lawmaker, José Trujillo.

“In Venezuela, we don’t even have a way to test [someone] to detect coronavirus,” Trujillo noted. “Prevention is key and in this country it is almost impossible to do it. International organizations should send aid to deal with this virus and avoid a tragedy.”

One of those international organizations, the United Nations’ WHO, identifies Maduro as Venezuela’s head of state, excluding President Juan Guaido, who the United States and most Western nations consider the nation’s leader.

“It remains unclear how the WHO would be able to distribute humanitarian aid or testing supplies in Venezuela given that it does not recognize Guaido and Maduro’s regime refuses to acknowledge that the country has needed humanitarian aid for years,” Martel wrote.

Guaido, who was a guest at President Donald Trump’s State of the Union address on Tuesday, met with Trump at the White House on Wednesday.

The Chinese Communist Party has invested heavily in keeping Maduro in power. China is responsible for building a social surveillance system known as the “Fatherland card” for Maduro to help track dissidents and deny them food and basic goods.

The United State is demanding that China, Cuba and Russia withdraw their support for Maduro.

Given the potential of a traveler from China bringing the deadly coronavirus into Venezuela – and the state of abandon and collapse that the Venezuelan healthcare system currently finds itself in – the National Assembly approved a measure that would create a protocol for how to handle a potential coronavirus case independent of the Maduro regime.

“This manual will be distributed in health centers, customs checkpoints, the Maiquetía International Airport, so that public officials will know what they are facing and what protection they should use,” said Olivares, who spearheaded the effort.

Trujillo added, “Venezuela will not escape the threat because we have alliances with Asian nations and the virus lives for 14 days before being detected [in someone’s body], so it can reach the country. The virus is a genetic alteration, but the truth isn’t being told to the world.”

Meanwhile, ten more people have contracted coronavirus on a cruise ship in Japan. The 3,700 people on the ship, including hundreds of Americans, have been quarantined aboard.

The Japanese Health Ministry said that an additional 10 people on Carnival’s Diamond Princess have been infected with coronavirus after 10 others were initially confirmed to have the illness. The total number of coronavirus victims in Japan has grown to 45 as the contagion continues to spread.

The Diamond Princess, which is docked in Yokohama, is carrying 428 Americans. Passengers on the ship are facing at least a two-week quarantine.

One American passenger on the ship told Reuters that food delivery to rooms on the vessel was slow.

“It’s surprising how the ship that was turning out 5,000 gourmet meals three times a day has found it difficult to deliver sandwiches and one hot meal. Where did they put the escargot and sushi?” Gay Courter, 75, said. “Of course, our biggest worry is that we have been infected at some point.”

“We are hopeful that the U.S. government will be sending transport for the Americans on board. It’s better for us to travel while healthy and, also, if we get sick, to be treated in American hospitals,” Courter added.

The death toll from the outbreak increased by 73 to a total of 563 on Wednesday, its largest single-day jump. China’s Health Commission said an additional 3,694 people were infected by the illness on Wednesday. The total number of those affected is now more than 28,000.

Reports that have made it past China’s censoring of news on the virus indicate that the communist government is vastly underreporting the death toll and numbers infected.