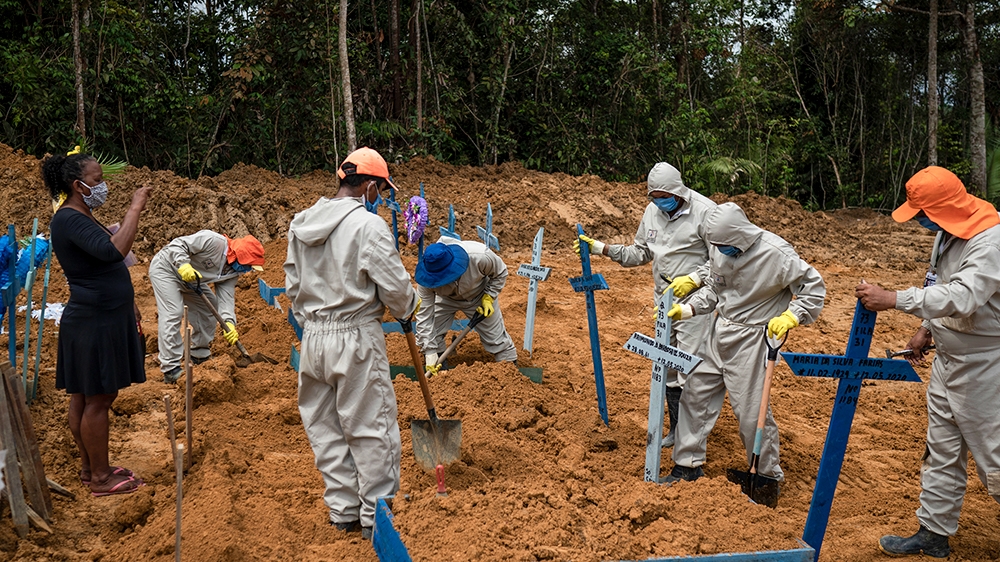 Here are all the latest updates:

10:05 GMT – Guterres: African countries may be spared worst of the pandemic

The relatively low number of confirmed cases in Africa has “raised hopes that African countries may be spared the worst of the pandemic”, United Nations Secretary-General Antonio Guterres said, while praising the continent for responding swiftly to the pandemic.

Guterres, however, warned that millions of people in Africa could be pushed into extreme poverty due to the pandemic.

“The pandemic threatens African progress. It will aggravate long-standing inequalities and heighten hunger, malnutrition and vulnerability to disease,” Guterres said.

Since the pandemic is still in its “early days” in Africa, he stressed that “disruption could escalate quickly”.

Russia’s coronavirus outbreak is entering a more stable phase, Prime Minister Mikhail Mishustin said, while warning that restrictions should be lifted carefully in the 17 regions where such moves have been authorised.

Russia’s coronavirus cases passed through 300,000, but with the lowest daily rise in infections since May 1.

Our time under lockdown has been tough on us mentally — and we probably don’t talk about it enough.

So how can restrictions on movement affect both our minds and bodies? #AJStartHere explains. pic.twitter.com/kzDGWNIQfv

Virtual safaris are helping to distract people under lockdowns while attracting badly needed support for African wildlife parks hit hard by the disappearance of tourists.

Wildlife tourism is a major source of revenue for countries like Kenya. Some operators are now sharing live broadcasts of safaris on social media in the hope that attention to endangered and other species doesn’t fade.

In the Ol Pejeta Conservancy, workers have created what they call Sofa Safari, driving around filming with a smartphone from an open-top vehicle.

“One of the ways we are trying to be innovative is looking at virtual ways of bringing wildlife to people’s homes, to their television sets and to their telephones,” said the conservancy’s managing director, Richard Vigne.

No new deaths were recorded, leaving the total number of fatalities at 114.

The German government gave itself new powers to veto hostile foreign takeover bids for healthcare companies, a measure designed to ensure a continuous supply of essential products during the coronavirus crisis.

The regulation, approved during a cabinet meeting, will allow the government to block foreign takeovers of makers of vaccines, precursor chemicals, medicines, protective equipment or medical machinery such as ventilators.

Health officials, wearing protective gear as a measure against the coronavirus (COVID-19) pandemic, are seen at a testing station, built at Festplatz in Wedding borough of Mitte, Berlin, Germany [File: Abdulhamid Hosbas/Anadolu]

The British government is still working on the details of how it will implement quarantine measures for people arriving in the country, interior minister Priti Patel said.

“We are still developing measures, so we are not in the position to say ‘this is how it’s going to work’,” Patel said during an interview on LBC radio.

“In terms of how this will work, we will be announcing this shortly,” she said, confirming only that the duration of quarantine would be 14 days.

Health Secretary Francisco Duque told a senate panel that the country is already facing a second wave of infections, with the first occurring in January when three Chinese from Wuhan tested positive of the virus.

The total number of positive cases worldwide exceeded 4.9 million, according to data collected by Johns Hopkins University in the US.

While the global death toll stands at 323,345, nearly 1.7 million people have recovered from the disease.

“What will we do here? There’s no food, no water, no work”

These migrant workers in India want to go home but remain stranded due to the #COVID19 lockdown. pic.twitter.com/7TCFcUv4fC

Cambridge University has become the first university to announce measures for the full 2020-2021 academic year, saying that it will move all lectures online, according to a Press Association report.

It may be possible for smaller teaching groups to take place if it conforms to social-distancing requirements, the university said, adding that the decision will be reviewed should there be any changes to “official advice on coronavirus”.

Russia reported 8,764 new cases, its lowest daily rise since May 2, taking the total number of documented infections to 308,705.

The country’s coronavirus response centre said 135 people had died in the past 24 hours, taking the death toll from the virus to 2,972.

06:58 GMT – Thailand says it expects vaccine next year after tests in mice

Thailand expects to have a coronavirus vaccine ready next year, a senior official said, after finding positive trial results in mice.

Thailand will begin testing the mRNA (messenger RNA) vaccine in monkeys next week after successful trials in mice, said Taweesin Wisanuyothin, spokesman for the government’s Centre for COVID-19 Situation Administration.

“The Thai vaccine is expected to be used next year,” he said.

The Thai vaccine is being developed by the National Vaccine Institute, the Department of Medical Science and Chulalongkorn University’s vaccine research centre.

06:33 GMT – Spaniards ordered to wear masks if they can not keep 2 metres apart

Spain’s government made it compulsory for everyone older than six to wear masks in indoor public spaces, and outdoor ones when it is impossible to keep more than two metres apart.

The health ministry in Spain, one of the hardest-hit countries, said the measures were needed to contain the spread of the coronavirus.

British engine-maker Rolls-Royce said that it would need to lay-off at least 9,000 of its 52,000 staff to make annual cost savings of 1.3bn pounds ($1.59bn) as it seeks to cope with the downturn in air travel caused by the pandemic.

“We are proposing a major reorganisation of our business to adapt to the new level of demand we are seeing from customers,” chief executive Warren East said in a statement.

The job losses would mostly take place in its civil aerospace business, the company said, as it started consultations with unions.

06:11 GMT – Polish schools may remain closed until end of June

Schools have been closed since March, when Poland confirmed its first case of coronavirus. By May 25 they will start offering day care for the youngest children, although teaching will still be conducted online.

The current school year ends on June 26, followed by a two-month long holiday in July and August.

Hello, this is Farah Najjar taking over from my colleague  Kate Mayberry .

I’m handing the blog to my colleagues in Doha shortly. A brief summary of developments this morning – Brazil recorded a record number of deaths for a single day on Tuesday,  the US praised Taiwan’s COVID-19 response as President Tsai Ing-wen was inaugurated for a second term, Estonia has begun tests for a digital immunity passport and Singapore has delivered a death sentence by Zoom.

04:35 – Man sentenced to death by Zoom call in Singapore amid court curbs

A man has been sentenced to hang in Singapore via a Zoom video-call, the first time the city-state has delivered a death sentence remotely.

Punithan Genasan, a 37-year-old Malaysian, was sentenced for his role in a 2011 drug deal on Friday, court documents showed, with the country under lockdown to try and curb one of the highest coronavirus rates in Asia.

“For the safety of all involved in the proceedings, the hearing for Public Prosecutor v Punithan A/L Genasan was conducted by video-conferencing,” a spokesperson for Singapore’s Supreme Court said in response to Reuters’ news agency questions, citing restrictions imposed to minimise the virus’ spread.

At the Supreme Court in Singapore July 1, 2019 which sentenced a Malaysian man to death in a Zoom call. {Edgar Su/[Reuters]

It was the first criminal case where a death sentence was pronounced by remote hearing in Singapore, the spokesperson added.

Genasan’s lawyer, Peter Fernando, confirmed his client received the judge’s verdict on a Zoom call and is considering an appeal. While rights groups have criticised the use of Zoom in capital cases, Fernando said he did not object because it was only to receive the judge’s verdict, which could be heard clearly, and no other legal arguments were presented.

Local media in Malaysia are reporting authorities have begun a raid on undocumented migrants in an area of Kuala Lumpur that is under enhanced lockdown.

In a statement, local MP Maria Chin Abdullah, who was distributing food aid when the trucks arrived, urged the authorities to stop using COVID-19 as an excuse to crack down on migrants.

“The prejudice and discrimination they are facing is unacceptable,” she said. “No one should be faced with such indignity especially at a time of crisis like this.”

There have been raids previously in other parts of the city with large populations of migrants.

PJ Old Town was sealed off behind razor wire on May 10 after a spike in coronavirus cases linked to a food market in the area, with no one allowed in or out. The enhanced lockdown is due to end on May 23.

The Baltic nation of Estonia has started testing one of the world’s first digital immunity passports, according to Back to Work, a coalition of technology firms, medical experts and local government officials which are developing the app.

The device collects testing data and allows people to share their health status with a third party via a temporary QR code.

Taavet Hinrikus, founder of Transferwise and a member of Back to Work, told Reuters the immunity passport was intended to “diminish fears and stimulate societies all over the globe to move on with their lives amid the pandemic.”

Venezuela has imposed new curfews in a number of towns along its border with Colombia and Brazil after a jump in coronavirus cases.

Information Minister Jorge Rodriguez said the country had confirmed 131 new cases in the past 24 hours – the most in a single day – with 110 of those in people who had returned from overseas.

Many Venezuelans have left the country because of economic collapse, finding work in nearby countries including Colombia, Peru and Ecuador. Those returning have to spend 14 days in quarantine in shelters at the border.

US Secretary of State Mike Pompeo on Tuesday praised Taiwan’s coronavirus response and called it a reliable partner, in a statement congratulating President Tsai Ing-wen on her inauguration for a second term that stood in sharp contrast with recent US criticism of China.

“We have a shared vision for the region – one that includes rule of law, transparency, prosperity, and security for all, Pompeo said in a statement. “The recent COVID-19 pandemic provided an opportunity for the international community to see why Taiwan’s pandemic-response model is worthy of emulation.”

Tsai won a landslide victory in elections held in January and her inauguration ceremony began on Wednesday morning. China claims self-ruled Taiwan as its own.

⚡️ 2020 🇹🇼 inauguration activities are underway in Taiwan, so please join me as I take the oath of office, deliver my inaugural address, & greet friends & allies from around the globe.https://t.co/Rj89TQoRiA

Premier Gladys Berejiklian says people living in New South Wales will be able to take holidays within the Australian state from the beginning of June.

Art galleries and museums will also reopen, but Berejiklian warned people they would need to adapt because some social-distancing measures would remain.

“We want people to enjoy themselves, to be free, but at the same time please know that nothing we do is the same during a pandemic,” she said in a televised media conference.

Brazil’s daily death toll from the new coronavirus reached a record 1,179 on Tuesday.

The highest daily toll before that had been on May 12 when 881 people died. The pandemic has killed at least 17,971 people in Brazil, according to the Health Ministry.

Right-wing President Jair Bolsonaro has been widely criticised for his handling of the outbreak, and has been a vocal opponent to coronavirus lockdowns that he sees as too damaging to the economy.

Brazil has the third-highest number of cases in the world after the US and Russia.

Read all the updates from yesterday (May 19) here.