Posted By: Nash Landesman 8 months ago 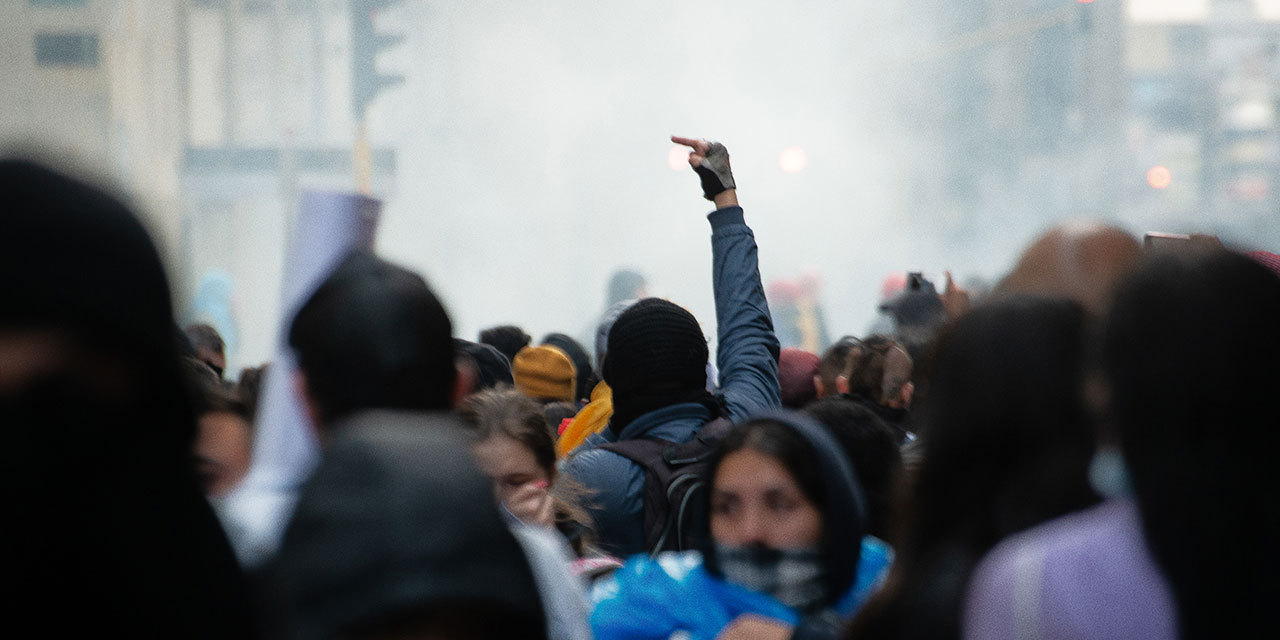 Hundreds of thousands of people have been protesting in Colombia over the past week, riding a wave of protest splashing across Latin America. But unlike some of the explicitly revolutionary dispositions taken-up in nearby countries, the country’s tide of discontent did not seem wholly intent on flushing out the society’s entire institutional fabric.

Sure, there were cries to rid Colombia of its hugely unpopular president, the 43-year old Ivan Duque, who sports a 29% approval rating. But rather than drag the man into the street by his collar, most protesters were content with holding artistic and creative signs to mark their displeasure with— well, just about everything that’s wrong with Colombia.

For some time now Colombia has been an island of relative stability is a sea of chaos. That’s why the nation’s (still ongoing) protest movement isn’t another link in the chain of anarchic regional breakdown tearing apart Ecuador, Chile or Bolivia.

Rather, it has reflected a uniquely Colombian temperament—one that tends to be order-oriented and stability-seeking, no matter how dire the situation.

Yet there was plenty to be incensed about. When you took to the streets, you were likely to be handed a protest menu of sorts—a folding paper pamphlet entitled, “Mobilizations throughout the country against the Duke’s pack: The OECD, the IMF and the World Bank.”

The menu listed “reasons to Join” like an Italian eatery indexes its À la carte options.

For starters, there was a stew of urban crime and rural violence—two issues inextricably linked.

Specials included a robust selection of corporate corruption, paired with endemic crime at the highest levels and gross government misconduct.

The youth went after prime cuts to higher education and the minimum wage; the elderly complaining that the retirement age was too high, and threatening to go higher; meanwhile condemning looming pension reform and privatization rumors.

The privatization of Colombia’s national oil company, Ecopetrol, was also on the table, along with healthcare woes, public transport, regressive taxation, crippling regulatory fines and mass-migration, pouring-in across the border from Venezuela.

The idea was that you picked out a few (hopefully not too intractable) problems to help guide your protest as office workers in the buildings above rained down confetti. Even a gaggle of armor-clad private security personnel raised their fists in solidarity.

“Today is a protest for everyone, about everything,” said one man standing atop a highway barrier last Thursday. “We’re not angry, exactly. We’re frustrated.”

Even as the rain poured down in thick pellets, pandemonium never broke out; leaving riot police standing by without reason to lift their batons (barring some troublemakers at the very end).

If you couldn’t find something to protest about, given Colombia’s collection of woes and a comprehensive, ready-made menu of causes distributed by the organizers (a collection of NGOs, unions, civil society groups and others), then you could go always “off-ballot,” opting to march for a cause of your own.

A lady who was a dentist, for instance, held up a sign condemning the healthcare system. “They are going to shut down my [dental] practice because I don’t have an elevator,” she said. “All of these regulations—more and more every year— they have corrupted our system.”

A young man beside her held-up a very different sign stating, “conservation is murder.” He explained that “huge territories are being seized from indigenous people under the name of conservation” [by groups like Conservation International and The Nature Conservancy]. “The conservationists and the military are one in the same,” he said.

But if there was just one visible core issue uniting the thousands of protesters, it was most everyone’s shared rejection of the Colombian state’s decades-long policy of massacring human rights defenders and indigenous peoples.

Many expected this long-entrenched program to be scaled back in lieu of the recent signing of a peace deal with FARC in 2016, but instead the violence has continued under altered pretexts; the state claiming to be pursuing new armed groups hiding among the indigenous.

Around noon, when the rain morphed into a hammering deluge, you could tell the fair-weather protesters apart from the ones whose lives and cultures were at stake.

Victims of state violence, the Wounaan Indians, prominent in the Darien Gap along the Panamanian border, continued to march in warlike formation, holding opposite ends of long bamboo sticks in such a manner as to “Red Rover” anyone who might dare try and break their ranks.

Like army battalions they marched in unison, chanting: “Los toques la uno, los toque los dos!” Roughly translated: “you touch one of us, you touch the other!”

The Colombian government’s recent bombing of a rural encampment earlier in November, which killed eight children and prompted Colombia’s defense minister to resign, drew particular ire from the crowd.

“The paramilitary groups are back,” one protester remarked, holding a sign that read: “Duque: how many children have you killed today?”

He noted: “There are 17 new armed groups killing social leaders and human rights activists,” many paramilitary groups loosely or overtly aligned with the official military. (Colombia frequently ranks near the top of the dubious list of countries with the most internal refugees, topped only by active war zones like Syria or Afghanistan.)

“I think it’s all about the drugs,” another protester said. “They are claiming lands which have been historically occupied by indigenous communities; they want to take these lands to plant cocaine. This president is not honoring the will of the people in ending the war once and for all.”

Since 2016, the year the FARC guerrilla group signed peace, some 200 native Colombians have been assassinated, according to indigenous organization ONIC.

Duque’s recent pledge to hunt down the mysterious gunmen responsible for the killings by sending in the military has many Colombians rolling their eyes again.

English-speaking urbanites who wished to support the life and death struggles of the indigenous had their own problems to worry about.

According to Jorge, a bi-lingual man in his 30s, “The economy is a complete disaster. The job situation is horrible. I went to U.C. Berkley for my law degree and luckily I am employed at a family firm. But a lot of my colleagues cannot find anything.  They went to The London School of Economics or to Columbia University—and they either cannot find work, or they get underpaid. If the economy isn’t working for someone who went to college, who studied abroad, imagine how it’s working for someone who didn’t even graduate high school.”

A younger university student hung from the branch of a palm tree, drinking a red can of beer while smoking a cigar. “The government made promises to fix the educational system. But students of science don’t even have a labs. Duque shouldn’t make promises he can’t keep.”