Posted By: Adriaan Alsema 9 months ago 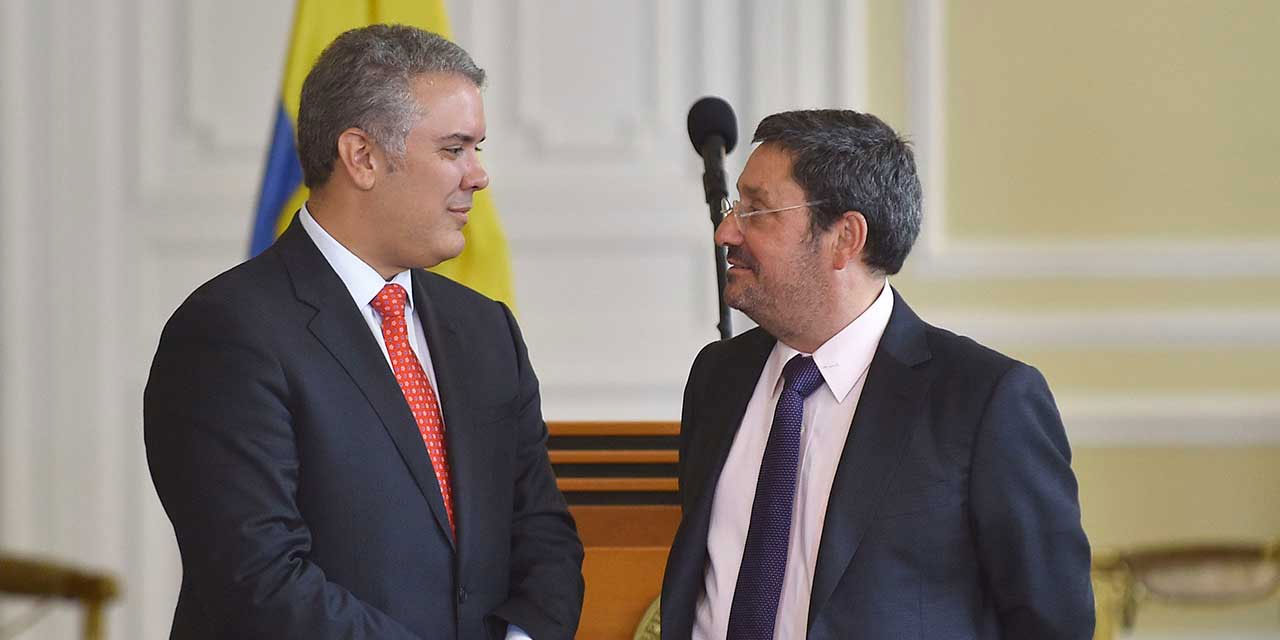 Colombia’s ambassador to Washington DC is in trouble again after being recorded badmouthing ministers and the administration of US President Donald Trump.

The scandal is Santos’ second since President Ivan Duque took office and shows the bad blood between individuals within the administration and the top of the Democratic Center party.

Furthermore, the recording confirms accounts by other diplomats who have said that working with the Trump administration is chaotic at best.

At the beginning of the conversation, Santos told Blum that the “State Department is destroyed. It doesn’t exist.”

“Trump put Tillerson and Tillerson came out with a spout of slime. I used to come here 10 years ago. I came to the United States a lot because I was the one who handled Human Rights… So I would go to the State Department and you knew how it worked, but the entrance was always to the State Department. You knew this was predictable, that it went like this. Today that’s over,” according to the ambassador.

I’ll tell you an anecdote. I got here at the very beginning and sat down with the Singaporean ambassador. Nothing more and nothing less. A very important country for the gringos. And I asked him how power works here. He told me: “Look, in the last administration”, that is, in Obama’s administration, “I went to the State Department once a week. I’ve been here for eight months and I don’t care about going, because it doesn’t matter.”

“This doesn’t mean [Secretary of State Mike] Pompeo doesn’t have weight, but for the rest, nothing. It’s divided by secretary, undersecretary… Below there it looks like an NGO,” Santos told the incoming foreign minister.

The ambassador additionally complained about Trump’s inconsistent foreign policy in regards to Venezuela and said he would try to lobby the issue in the US Congress.

They need to understand that this clusterfuck is going to destabilize the whole continent, because they have no attention span. The thing is that after 10 minutes they get bored here and move onto another subject. It’s up to me to invent things so that they have Venezuela at the top of their mind.

The dysfunctional Duque administration, according to Santos

According to Santos, Trujillo “did nothing. He had no strategy.” Blum responded that the current defense minister is “a disaster”

Francisco Santos: He had no strategy. I asked him “what are you here for?” He got us running to get him appointments and then he would cancel them. No, no, it was….”

“I spent a year asking for directives. But okay, it doesn’t matter,” said Santos, who said he hoped Trujillo would do a better job at Defense that Botero who, according to Santos, was dysfunctional.

I have a problem, I don’t have an interlocutor in Defense, because Botero didn’t work, he never showed. I hope Carlos will be the interlocutor.

When confronted with the leaked conversation by W Radio, Santos’ immediate reaction was: “Fuck!”

Later, he apologized to Trujillo and Botero for badmouthing them, and apologized for not expressing his concerns about the alleged dysfunctionality of the ministers to the president.