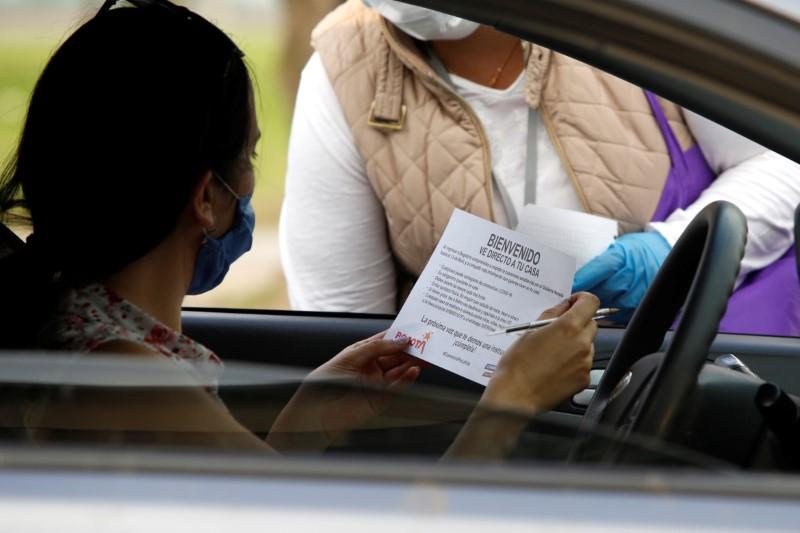 BOGOTA (Reuters) – Thousands of Colombians were rushing to return to their home cities on Tuesday while others hurried to banks, supermarkets and other shops before the late-night start of a mandatory 19-day national quarantine meant to curb the spread of coronavirus.

FILE PHOTO: A city official gives a traveler a sign that reads: “Welcome, go straight home” hours before the Colombian government’s mandatory nineteen-day isolation as a preventive measure against the spread of the coronavirus disease (COVID-19), in Bogota, Colombia March 23, 2020. REUTERS/Leonardo Munoz.

Distressed travelers who were trapped in capital Bogota during an obligatory isolation drill over the long weekend were unsuccessfully looking for seats on buses out of the city so they could spend the quarantine at home.

“I’m scared because I need to get home,” said Fernando Lopez, 50-year-old disabled man who traveled to Bogota from his home in Palmira for a medical appointment. “I don’t know anyone, what will happen to me if we can’t travel? My family is waiting for me.”

The quarantine will run until April 13. So far the country has reported 306 cases of the disease and three deaths.

The government of President Ivan Duque has ordered Colombians to stay in their homes, blocked international and national flights and restricted the use of long-distance public transport.

People are allowed out under 34 exceptions which include travel for medical staff and delivery workers. One person per household is allowed to go buy food and medicine.

Violation of the measures can mean up to eight years in prison and large fines.

“I have to look for a way to get out because everything I do is for them,” said 22-year-old Venezuelan migrant Gabriela Martinez, gesturing at her two young children.

Martinez, who fled her country two years ago, recently lost her job in Bogota and was evicted from her home. She was searching for a bus to Tocancipa, where she has family.

She had the equivalent of $8 in her pocket.

Some have already begun to protest the measures.

In the central Plaza Bolivar, hundreds of street sellers, migrants and some homeless people gathered to demand the government honor promises to help the most needy. Duque has promised to make extra payments to welfare programs this week.

The military is ready to help patrol streets in large cities to ensure compliance with the quarantine, Defense Minister Carlos Holmes Trujillo said.

Operations against leftist guerrillas and criminal gangs will continue, he said.

Outside a Bogota bank dozens of people waited in a drizzle to withdraw money.

“I came out to get a bank card so I can withdraw cash,” said a visibly annoyed Jose Romero, 57. “What I’ve actually probably got is the disease.”