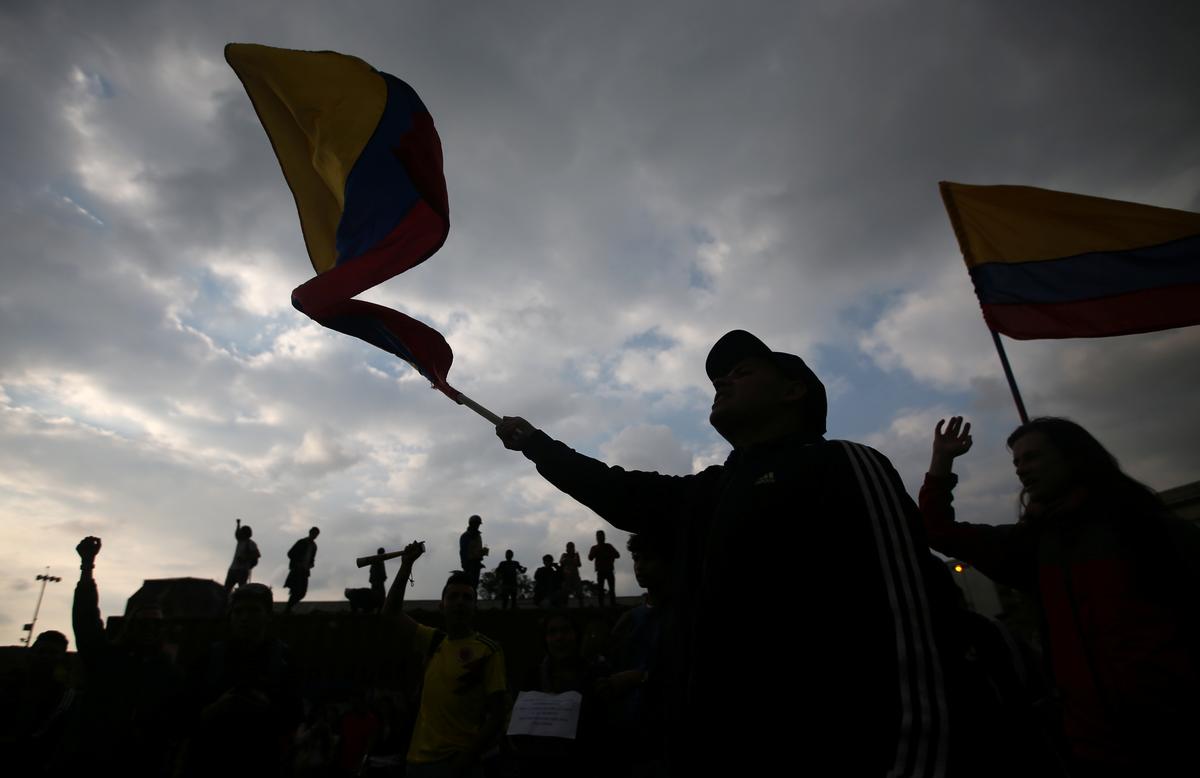 BOGOTA (Reuters) – Protesters took to Colombia’s streets on Monday for a fifth day of demonstrations over issues including economic reforms, police violence and corruption as President Ivan Duque was set to meet with unions and business leaders.

A protester waves a flag during a demonstration on Plaza de Bolivar as the national strike continues, in Bogota, Colombia November 24, 2019. REUTERS/Luisa Gonzalez

The protests began with a 250,000-person march last week and have been marked by widespread neighborhood “cacerolazo” demonstrations – a traditional Latin American protest in which people bang pots and pans.

Protesters of all ages have declared themselves against rumored economic plans such as a cut to the minimum wage for young people that Duque denies supporting. They have also highlighted what they say is a lack of government action to stop the murder of hundreds of human rights activists.

Duque has promised a “great national dialogue” focused on social issues and the fight against corruption to run through mid-March and invited citizens to submit proposals for how to improve Colombia. Duque’s meeting on Monday was to be with business representatives as well as the unions which organized the original march.

Many protesters are also demanding the government fully implement a 2016 peace deal with Revolutionary Armed Forces of Colombia (FARC) rebels, which Duque unsuccessfully tried to modify.

Tactics used by riot police to disperse demonstrations, including the use of tear gas and sound grenades, have angered many, especially after 18-year-old protester Dilan Cruz was gravely injured on Saturday afternoon.

The protests have been largely peaceful, despite isolated looting in some areas and the institution of overnight curfews in Bogota and Cali.

The government has said three people were killed following Thursday’s protests in incidents the police said involved looting. More than 340 police officers have so far been injured.

Colombia’s migration agency said early on Monday it had deported 59 Venezuelans who were “engaging in a series of activities that put public order and national security at risk.”

The agency said it respected the right to protest but refused to allow the actions of a few to affect security or generate xenophobia. There are some 1.4 million Venezuelans living in Colombia.

Duque’s administration has been plagued by problems during his nearly 16 months in office, including a combative congress, low approval ratings and unsuccessful legislative efforts.

The protests have coincided with demonstrations elsewhere in Latin America, from anti-austerity marches in Chile, inflamed tensions in Ecuador and Nicaragua and protests over a fraught election in Bolivia that led President Evo Morales to resign.