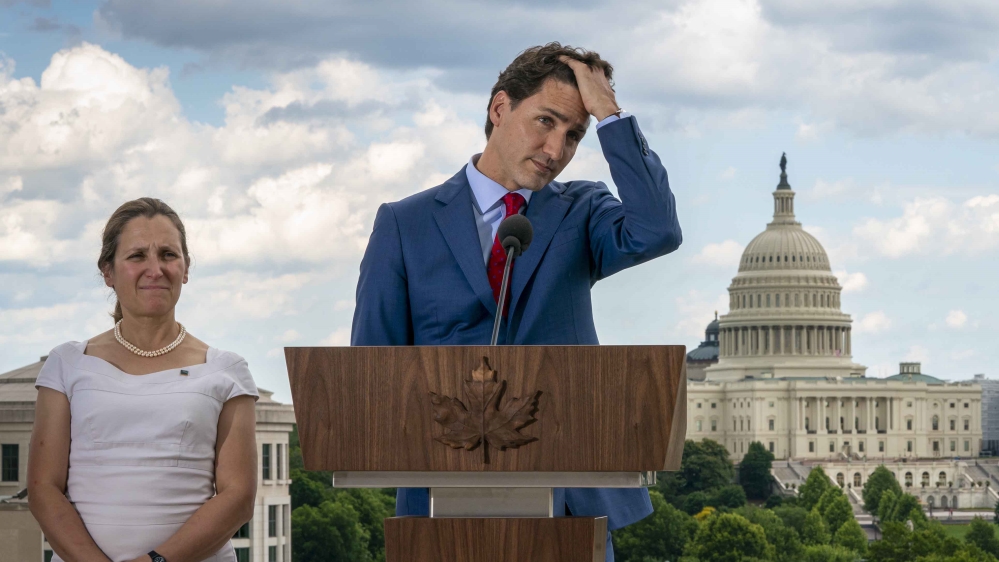 So he has gone into hiding to tend to his electoral wounds. Justin Trudeau kept his job. But for how long? He knows Liberals are allergic to minority governments he now leads. He will likely get one more chance to win a majority. If Trudeau doesn’t, he may have to take a walk in the snow and quit like his father once famously did or risk the humiliation of being pushed out.

When Trudeau inevitably departs – voluntarily or involuntary – his successor will already have been anointed, if Canada’s corporate media could cast the deciding vote. The gooey love affair between Chrystia Freeland and her many fawning suitors in the fourth estate has been on cringe-worthy display since the journalist turned politician.

The former foreign minister has exploited that almost unconditional affection to heighten her profile nationally with a determined view to one day be called prime minister.

Freeland’s designs to assume the prime minister’s office eventually became more apparent when Trudeau recently tapped his duteous foreign minister as deputy prime minister and de facto heir to the throne he now occupies – although in a diminished state.

Freeland’s long-established status as the “chosen one” was plain after her ascension in November to, in effect, Trudeau’s right-hand woman.

Here is a small sample of Freeland’s veneration in the establishment press in the weeks since her promotion. The “indispensable” prime minister-in-waiting has been described as being “famous for her people skills,” while enjoying the “magic touch” and a CV “beyond reproach“.

These sweet baubles are proof that so many Canadian journalists are willing to abandon any pretence of exercising the critical faculties they are alleged to possess, preferring instead to engage in predictable and embarrassing hagiography.

These media-manufactured confections are also a reminder of how these same scribes once anointed Trudeau a saint who, in words and deeds, emerged as the refreshing antithesis of Donald Trump on the international scene.

That saccharine-laced fantasy evaporated after Trudeau was found to have broken the law to achieve his parochial political aims and to have indulged in donning racist blackface time and again well into adulthood.

Like Trudeau, Freeland is adept at self-promotion. And, like her patron, Freeland has never passed on the opportunity to promote her effervescent brand when a microphone or camera obliges.

Hence, the happy picture of Freeland as the savvy diplomat and deft tactician has taken root, with little, if any, dissent.

Even a cursory examination of Freeland’s public record is enough not only to torpedo that myth, but to establish that Trudeau’s heir shares his self-serving, malleable principles at home and abroad.

As far as I can tell, Freeland’s defining foreign policy “achievement” – celebrated by her credulous fans inside and outside the press – was lassoing a mercurial Trump into signing, along with Mexico, a renegotiated North American Free Trade deal.

Alas, the trade pact comes with a big, political caveat. The deal may not be ratified any time soon by a US Congress too preoccupied with impeachment.

Still, just how did the savvy Freeland tame the presidential beast? In large measure, by not uttering so much as a syllable of censure while Trump lauded tiki torch-wielding neo-Nazis in Charlottesville, Virginia as “very fine people” and remaining mute when the US president referred to Haiti and an assortment of African nations as “sh**hole countries”.

To her cheerleaders, Freeland’s silent complicity in the face of such blatant bigotry and stunning ignorance is a diplomatic virtue to be applauded and, if need be, conveniently forgotten, rather than denounced.

No matter. According to one starry-eyed columnist, the other “signature” issue that also helped stamp Freeland’s tenure as foreign minister was her “personal initiative” to cobble together a coalition “to promote democracy in Venezuela and stanch its epic flow of refugees.”

Democracy, huh? And here I thought – foolishly, I gather – that Freeland, working hand-in-glove with that shining avatar of Alexis de Tocqueville-like liberalism, Brazil’s president, Jair Bolosonaro, had tried, unsuccessfully, to engineer a coup d’etat in Venezuela and instal an agreeable, Washington-approved puppet.

In this avowedly anti-democratic geopolitical endeavour, Freeland found common cause – again – with a far-right president who traffics in lunatic conspiracy theories, including one in which actor Leonardo DiCaprio stands accused of paying for the forest fires ravaging Brazil’s rainforest.

In counting incoherent conspiracy-mongering charlatans like Bolosonaro and Trump as amigos she can do business with, Freeland has forfeited any claim at being considered a “progressive”.

As for her vaunted “people skills”, a veteran and well-placed Canadian diplomat confirms that Freeland alienated staff at Global Affairs Canada headquarters in Ottawa because of her habitual absences and indecisiveness.

The cockeyed decision to have Freeland retain the Canada-US file – Canada’s dominant bilateral relationship – means there are two foreign ministers at the helm, wresting over the nation’s waning global stature.

In any event, perhaps the most glaring deception abetted by Freeland’s amnesiac allies is the claim her feminist and human rights credentials are, like her resume, “beyond reproach”.

I recall when, not so long ago, Freeland abandoned her cabinet colleague, Jody Wilson-Raybould, while Trudeau and his office orchestrated a campaign to smear, demote and ultimately roust a principled justice minister from her job.

What was Wilson-Raybould’s fatal transgression? She asserted her constitutionally-protected independence and defended the rule of law in the face of unrelenting pressure from Trudeau and his unelected acolytes to have her intervene to make the criminal prosecution of a powerful Quebec-based engineering firm disappear.

In a naked act of sycophancy, Freeland – the self-proclaimed feminist – supported her boss and his ejection of Wilson-Raybould and another female cabinet minister who sided with the former justice minister from caucus, while casting doubt implicitly on her detailed (and subsequently corroborated) version of events.

“Of course, I support the prime minister 100 percent,” Freeland told a radio interviewer. “I believe that she [Wilson-Raybould] spoke as she said she wanted to do – her truth. Having said that, I am very clearly of the view that the prime minister would never apply improper pressure.”

Despite a damning verdict by Canada’s Ethics Commissioner that Trudeau had “used various means to exert influence over Ms Wilson-Raybould”, Freeland chose, unsurprisingly, political expediency over principle. “I, personally, have full confidence in the prime minister,” she said.

Chrystia Freeland is no Gloria Steinem. Indeed, I suspect her “hero” would, at a minimum, be chagrined by Freeland’s sorry appeasement and desertion of her cabinet sisters.

Freeland, the human rights “champion”, is another risible, media-manufactured mirage.

Are human rights champions content to say and do nothing while scores of Palestinians, including women and girls, are summarily murdered by Israeli snipers for peacefully opposing their apartheid-like occupation on what remains of Palestinian soil?

That is a rhetorical question.

In Freeland’s calculus, the executions of Palestinians might just as well have occurred on another planet, all victims of some unknown, alien entity.

But, on May 14, 2018, the tally of assassinated Palestinians was so egregious that Freeland was grudgingly compelled to emerge from her self-induced coma to pen a 45-word tweet – yes, a tweet – in which she said she was concerned and saddened “by deaths injuries that occurred today over past weeks.” True to form, she did not identify the perpetrators.

Freeland’s confederates are willfully blind or busy rewriting this squalid history while they plant a halo over their rising star’s head.