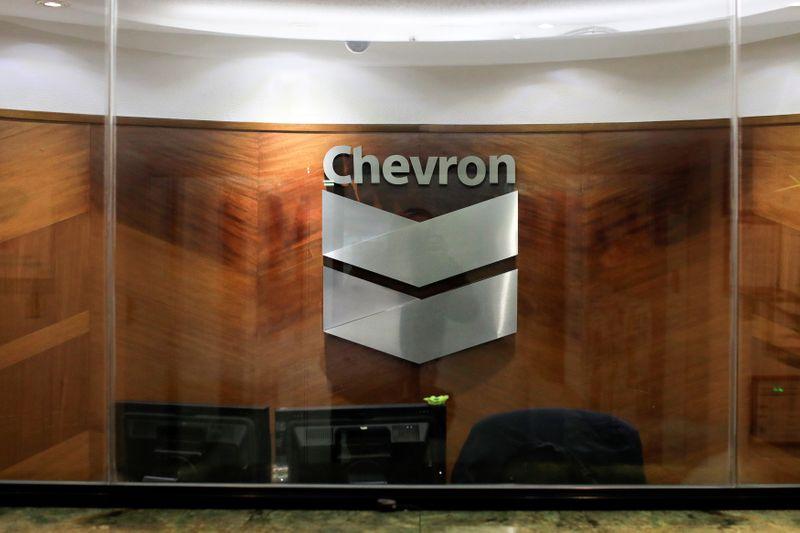 CARACAS/WASHINGTON (Reuters) – Chevron Corp’s share of oil output at its joint ventures in Venezuela with state oil company Petroleos de Venezuela SA dropped 16% in 2019 to 35,300 barrels per day (bpd), down from 42,000 bpd in 2018, a company spokesman said on Tuesday.

FILE PHOTO: The logo of Chevron is seen at the company’s office in Caracas, Venezuela April 25, 2018. REUTERS/Marco Bello/File Photo

The drop mirrored the decline in crude output across the South American country last year, according to data provided to OPEC, as it suffered from crippling blackouts in March and April and U.S. sanctions on PDVSA aimed at ousting socialist President Nicolas Maduro.

The country told OPEC it produced 907,000 bpd in December, up from 761,000 in October but well below pre-sanctions levels.

Output at the Petropiar joint venture in the Orinoco oil belt, in which Chevron has a 30% stake, rose to an average of 120,900 bpd in November after producing as little as 45,000 bpd in late August, according to people with knowledge of PDVSA data and a document seen by Reuters.

“We remain focused on our base business operations, in full compliance with all applicable laws and regulations,” Chevron spokesman Ray Fohr said.

Chevron, along with a handful of U.S. oilfield services companies, has a license to continue operating in Venezuela despite the U.S. sanctions. The license has been renewed by the U.S. Treasury Department multiple times, most recently in January, and is set to expire on April 22.

A U.S. official last week warned companies including Chevron continuing to operate in Venezuela to “tread cautiously.” Chevron defended its activities and said if the company were forced to leave Venezuela, non-U.S. companies would take its place.

Neither the U.S. State Department nor the White House immediately responded to requests for comment.

The California-based oil major receives crude from the projects corresponding to its ownership stake, with PDVSA receiving the rest. PDVSA does not disclose the total output of its joint ventures.

Neither PDVSA nor Venezuela’s oil ministry immediately responded to requests for comment.

Reporting by Luc Cohen in Caracas and Timothy Gardner in Washington; Editing by Tom Brown