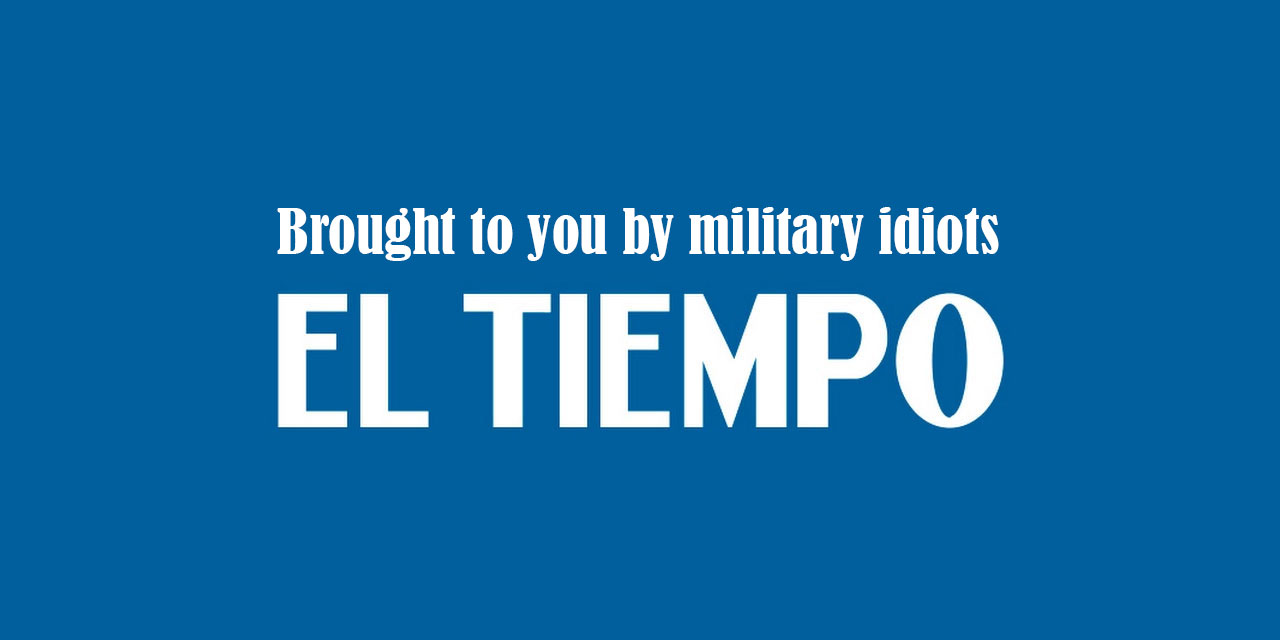 If newspaper El Tiempo and Colombia‘s Military Intelligence want to looks like idiots with another half-witted conspiracy theory again, they should not embarrass the entire country.

Colombia’s largest newspaper in general has become rubbish after they were bought by corrupt banking conglomerate Grupo Aval, but their so-called Investigative Unit is really the pits.

Probably unbeknownst to them, but publishing Military Imbeciles’ nonsensical rubbish confirms “military intelligence” is a contradiction in terms and that El Tiempo’s wage slaves are too incompetent to help their half-witted military buddies conjure up a semi-credible conspiracy theory.

Allow me inform Military Intelligence that I have been investigating the ELN’s Eastern War Front for a while now assuming.

The Eastern War Front commander until recently was known as “Lenin” if he hasn’t changed his nom de guerre by now, which ELN leaders regularly do to confuse their enemies.

I find it hard to believe that Ariel, the alleged commander of the ELN’s Urban War Front, would be welcomed as a provisional commander in between Lenin and his subordinate “Pablito” as claimed by El Tiempo.

It is evident is that the Military Idiocy en El Tiempo are desperately trying to link Venezuelan President Nicolas Maduro to the 2019 terrorist attack in Bogota that killed dozens of innocent police cadets.

To make the conspiracy theory even more grotesque, El Tiempo insinuated opposition Senator Gustavo Petro was somehow complicit in this car bomb attack, a claim as credible as me having a two-headed lovechild with a Martian.

Colombia’s “Military Idiocy” made President Ivan Duque look like a complete imbecile at the United Nations General Assembly last year already, so them coming up with another dumb-ass conspiracy theory is of no surprise to anyone.

Nobody cares about El Tiempo further dragging whatever is left of its reputation through the mud and engage in political warfare not even an eight-year-old would fall for.

However, it would be nice when becoming the laughing stock of the international community they do not embarrass the entire country again. Colombia’s military and El Tiempo have been enough of a disgrace already.

Some 97% of Colombians and this Dutchman would really like to get rid of both Nicolas Maduro and the ELN by now, but for this to succeed it would help if Military Idiocy and El Tiempo cooperate.