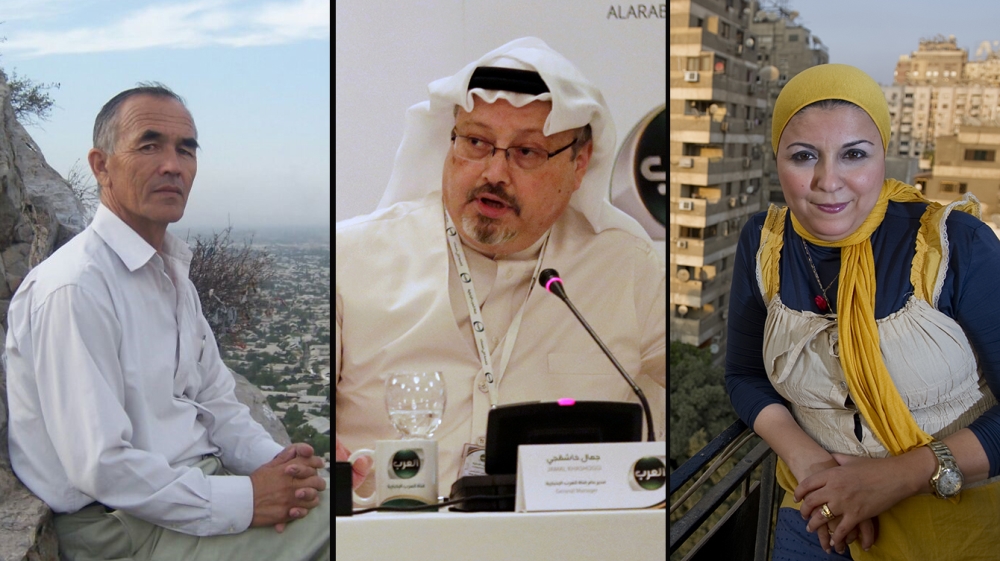 The One Free Press Coalition, a group formed by news organisations and publishers to advocate for journalists under attack worldwide, has released its tenth monthly list of journalists whose freedoms are under threat.

Every month, the One Free Press Coalition identifies 10 “most urgent” cases of journalists to advocate for press freedom.

It also calls for the release of journalists around the world who have been arrested and imprisoned without any formal charges.

The coalition, which includes Al Jazeera Media Network, comprises 36 other prominent members such as The Associated Press, Bloomberg, the Financial Times, Forbes, Reuters News Agency and the Washington Post.

The list for December includes a Kyrgyz reporter who has spent nine years in prison for reporting on human rights violations and the deteriorating health of a Kashmir-based editor held since July.

China has the second-largest number of imprisoned journalists, according to the Committee to Protect Journalists (CPJ).

Among those imprisoned is Sophia Xueqin Huang, a freelance journalist who reported on anti-government protests in Hong Kong this year that have rocked the China-controlled territory since June.

Also a prominent figure in the #MeToo movement in China, she was arrested in Guangzhou on October 17 on charges of “picking quarrels and stirring up trouble” – a charge often used by the authorities to detain activists, according to the Human Rights Watch (HRW).

The crime could mean five years in prison.

One year on, no independent criminal investigation has been launched into the death of Jamal Khashoggi, a former Washington Post columnist.

Khashoggi was murdered by a Saudi hit squad inside its consulate in Istanbul on October 2, 2018. His dismembered body has not yet been found.

Read more about his case and the calls for accountability here.

Diaz was arrested in March and charged with “instigating crimes”.

According to the CPJ, state security agents raided his apartment and confiscated his money and equipment, including computers and phones.

After protests in support of Diaz in Caracas, he was released on the condition that he would report to intelligence officials every week.

He is also prohibited from leaving the country or speaking publicly about his detention.

Svetlana Prokopyeva, a freelance journalist from Pskov, faces up to seven years in prison on charges of “justifying terrorism” for an article she wrote about an October 2018 suicide bombing at the local Federal Security Service (FSB) headquarters in Arkhangelsk, Russia.

Her home was raided and her passport seized by authorities. Reporters covering her case are being harassed as well.

The family of Qazi Shibli, a South Kashmir-based editor, has expressed concerns about his deteriorating health.

He was detained in July this year at a police station after he reported on troop movements on Twitter prior to the Indian government revoking the special status accorded to Indian-administered Kashmir in its constitution.

He is being held on charges including “waging war against the Union of India”, “creating fear and panic among common people,” and being “deeply involved in disrupting the peaceful atmosphere” and “seeking to motivate the people to work for seceding the state of Jammu and Kashmir from the union of India.“

Journalist Hamid al-Mahdaoui has served half of a three-year sentence for failing to tell police he was offered weapons during the protests in 2017.

The sentence was upheld this year. Al-Mahdaoui is on a hunger strike. He is being denied medicine, food and access to a doctor, according to the CPJ.

Sofiane Merakchi, a freelance journalist, was arrested in September at his office in Algiers, according to the news reports.

Merakchi has been charged for working for foreign news outlets without a licence and “evading customs authorities while importing broadcasting equipment”. His November 15 hearing was postponed.

If found guilty, Merakchi could face two to seven years in prison for the customs evasion charge.

The ethnic Uzbek award-winning journalist has served nine years of a life sentence for reporting on human rights violations.

In addition to his deteriorating health and limited access to medication, Azimjon Askarov‘s letters home from prison have noted punishment for detainees after the visiting days.

Despite persistent international condemnation, a Kyrgyz court ruled to uphold his life sentence in July.

At least seven journalists have been arrested in Egypt since anti-government protests began in September this year, including Esraa Abdel Fattah, a reporter and activist who focuses on cases of human rights abuse.

Esraa was arrested by plain-clothes security officers in Cairo on October 12 and was reportedly beaten and choked after she refused to unlock her mobile phone.

A freelance journalist investigating the mysterious killings in rural Tanzania, Gwanda has been missing since November 21, 2017.

The government has failed to conduct a credible investigation or disclose knowledge of his whereabouts.

In July, Foreign Minister Palamagamba Kabudi said in an interview that Gwanda had “disappeared and died” but backtracked amid requests for clarification.