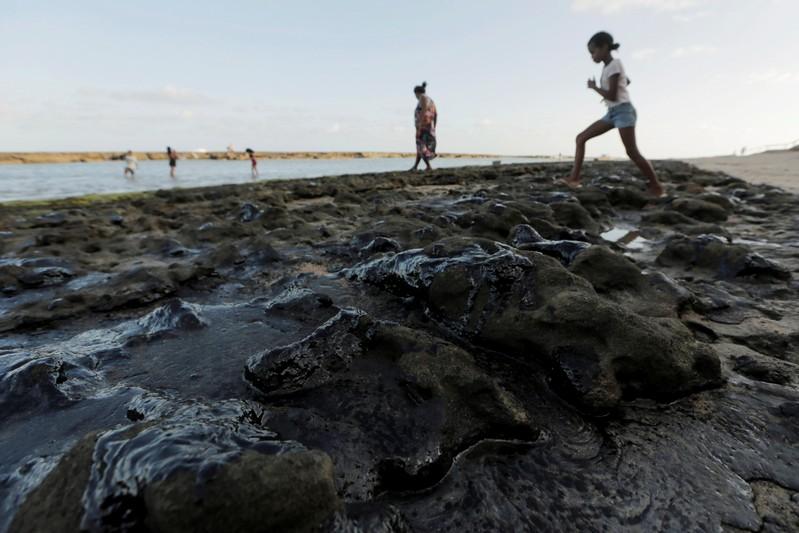 An oil spill is seen on Pontal do Coruripe beach in Coruripe, Alagoas state, Brazil October 8, 2019. REUTERS/Alisson Frazao NO RESALES. NO ARCHIVES

Bolsonaro also appeared to row back comments from Monday, when he suggested the oil could be from a shipwrecked vessel, suggesting the evidence did not suggest such a cause. He also said he did not want to blame another country without proof, or it would cause a problem.

“If it was a shipwreck, oil would still be coming up. It is more probable that something was dumped there criminally,” Bolsonaro told reporters.

A study by state-run oil company Petroleo Brasileiro SA, or Petrobras, suggests the oil came from Venezuela, according to a person familiar with the matter, who suggested that the volume of oil pointed to a sunken oil tanker.

Petrobras said that molecular tests on the organic material in samples of the crude oil showed they were not compatible with the oils it produced and sold. The company declined to say whether the oil slicks were from Venezuelan crude.

The oil has washed up in recent weeks on more than 100 beaches in nine northeastern states from Maranhao to Bahia. Its origin has generated an array of speculative explanations amid growing environmental concern.

“It does not look like a criminal spill. It seems to be accidental,” said the person familiar with the Petrobras study, who requested anonymity because the report is not public.

Speaking before a Congressional hearing on Tuesday, Petrobras Chief Executive Roberto Castello Branco said the amount of crude collected so far – over 500 barrels – rules out the source being an oil tanker cleaning its tanks at sea.

The presence of oil along such a extension of coastline indicates that “something extraordinary” had happened, he said.

Castello Branco said, however, that it was not the company’s responsibility to investigate where the oil had come from, because that was the job of the Brazilian Navy and police.