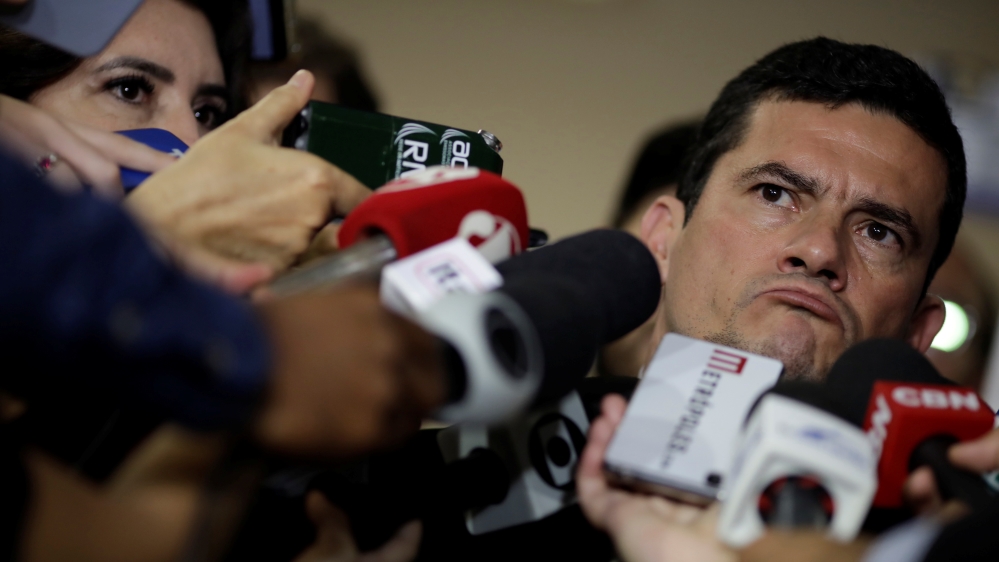 The report came after The Intercept last month began publishing excerpts from leaked chats with Moro, causing a scandal for the former anti-corruption judge who became attorney general under far-right President Jair Bolsonaro.

On Sunday, The Intercept published chats in which Moro considers whether to use information gathered about Odebrecht during the Car Wash investigation against socialist leader Maduro, who has presided over a political and humanitarian crisis in Venezuela.

“Maybe we should reveal Odebrecht’s confessions about bribes in Venezuela?” Moro said to chief prosecutor Deltan Dallagnol via the encrypted Telegram messaging app in August 2017.

Earlier in the conversation, Dallagnol had told Moro, “There will be criticism and a price (to be paid), but it’s worth exposing oneself to help the Venezuelans.”

It remains unclear if the confessions were ever leaked, but Odebrecht has admitted to paying bribes across Latin America, including $98m in Venezuela – its biggest payoff outside Brazil.

In a statement, the prosecutor’s office in the city of Curitiba, which handled some of the most publicised aspects of the probe, rejected The Intercept’s report.

The office said it didn’t recognise “the messages attributed to its members in recent weeks. The origin and veracity of the messages, obtained via cybercriminals, cannot be confirmed.”

The corruption scandal surrounding Odebrecht, Latin America’s biggest construction firm, has stretched across a dozen countries in Latin America and two in Africa, with the company implicated in handing out cash to win lucrative public contracts.

The revelations regarding Moro have led to calls for his resignation along with demonstrations in support of the justice minister.

On Sunday, DataFolha Institute of Research released a poll in which 58 percent of respondents said that Moro’s decisions in the Car Wash probe should be reviewed if the claims against him are proven to be true.

On June 26, the country’s Supreme Court rejected an appeal by the imprisoned former president in the wake of the expose.