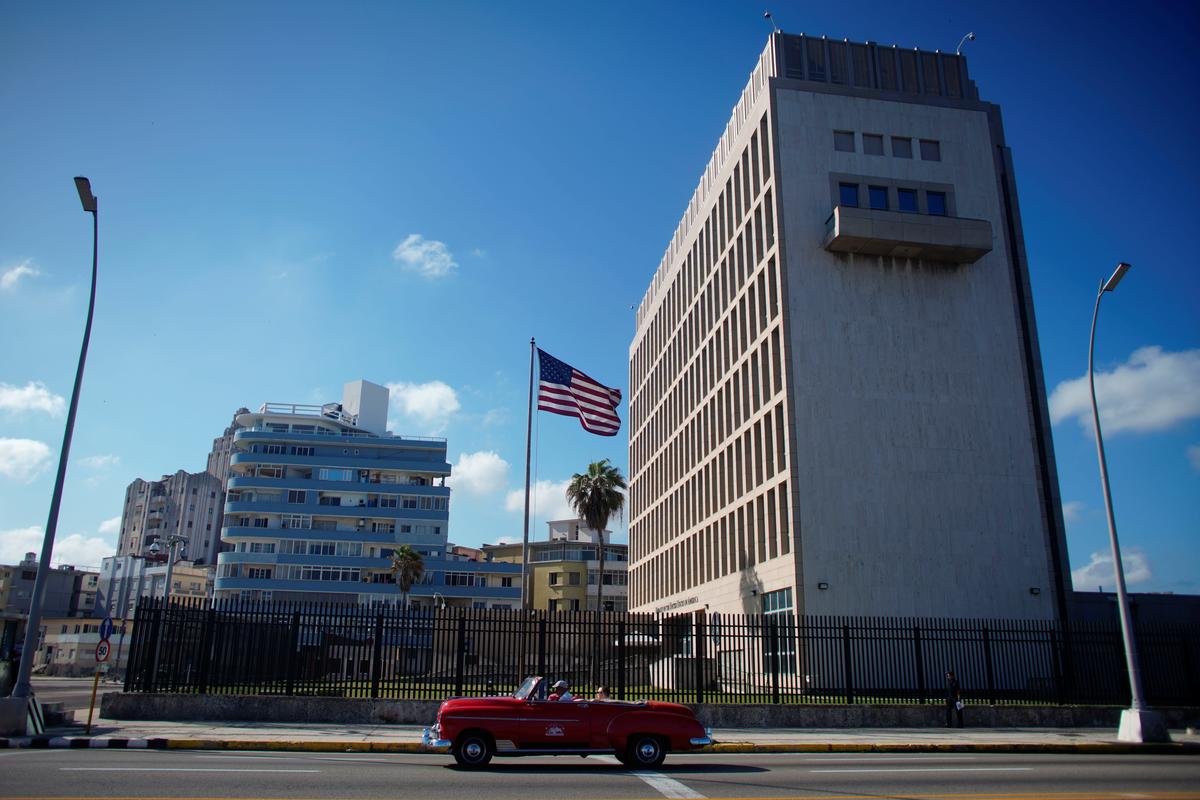 UNITED NATIONS (Reuters) – Brazil voted for the first time with the United States on Thursday against an annual United Nations resolution condemning and calling for an end to Washington’s economic embargo on Communist-ruled Cuba, while Colombia and Ukraine abstained.

Tourists in a vintage car pass by the U.S. Embassy in Havana, Cuba, November 7, 2019. REUTERS/Alexandre Meneghini

The 193-member General Assembly still overwhelmingly adopted the resolution for the 28th year with 187 votes in favor. U.S. ally Israel also voted no and Moldova did not vote. The U.N. vote can carry political weight, but only the U.S. Congress can lift the more than 50-year-old embargo.

The policy shift by Brazil represents the latest attempt by President Jair Bolsonaro to draw closer to U.S. President Donald Trump since taking office in January but runs against the interest of some major Brazilian firms.

Brazil’s Souza Cruz Ltda, owned by British American Tobacco PLC has a joint venture in Havana that makes most of the cigarettes in Cuba. Traditionally, Brazil has objected to how the U.S. applied its domestic politics to foreign policy, punishing companies from countries that trade or invest in Cuba.

Colombia’s abstention follows a chill in its relations with Cuba.

Cuba once hosted peace talks between Colombia and its National Liberation Army (ELN) rebel group, but Havana’s refusal to extradite three guerrilla commanders after negotiations broke down has led to repeated criticism from the government of President Ivan Duque.

Colombia abstained from the vote because of Cuba’s “hostile attitude” toward its extradition requests for the “confessed terrorists” and its support for Venezuelan President Nicolas Maduro, the foreign ministry said in a statement.

The United States consistently voted against the U.N. resolutions for 24 years but abstained for the first time in 2016 under former President Barack Obama, as Washington and Havana forged a closer relationship.

Relations have deteriorated sharply under Trump, returning to Cold War characterizations of Cuba and tightening trade and travel restrictions that had been eased by Obama.

“The United States is not responsible for the Cuban regime’s endless abuses of its people,” U.S. Ambassador to the United Nations Kelly Craft told the General Assembly ahead of the vote.

“It is our first responsibility as leaders to defend those without a voice, today most especially the people of Cuba. Shame be upon us if we refuse to raise our voices in defense of theirs,” Craft said.

Last year the United States proposed eight amendments to the resolution to push Cuba to improve its human rights record, but all of the proposals failed.

“The U.S. government does not have the slightest moral authority to criticize Cuba or any other country when it comes to human rights,” he told the U.N. General Assembly, citing an opioid crisis, gun violence, poverty and unemployment in the United States.