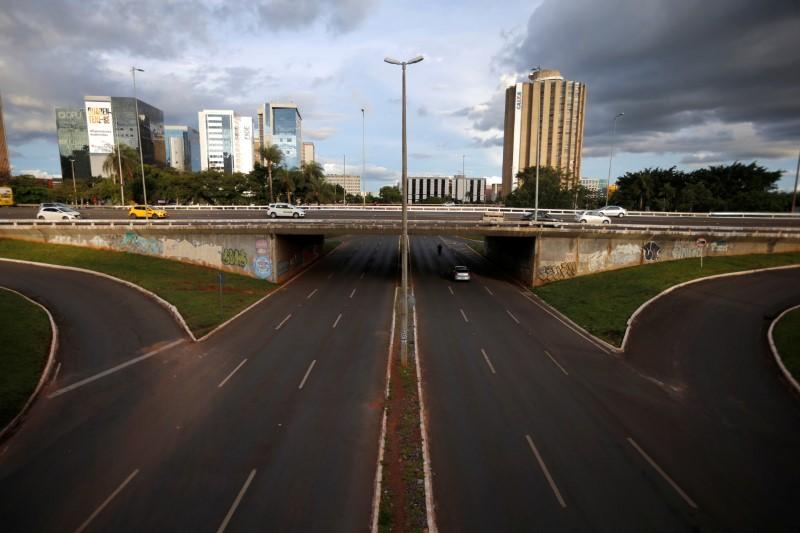 BRASILIA/SAO PAULO (Reuters) – Brazil began to process the accelerating horrors of the spread of the new coronavirus on Friday, slashing economic growth outlooks, warning of a healthcare collapse and announcing new measures to fight a crisis that has also taken a toll on President Jair Bolsonaro’s popularity.

A general view of an empty street during the coronavirus disease (COVID-19) outbreak in downtown Brasilia, Brazil, March 20, 2020. REUTERS/Adriano Machado

The senate on Friday signed off on a state of emergency that will permit the government to waive fiscal targets this year.

The Economy Ministry lowered its growth forecast from 2.1% to zero – a number many economists believe remains highly ambitious – with a “significant” contraction coming in the second quarter.

At least 11 people have died from the virus, the health ministry said, up from seven on Thursday, and more than 900 people are now infected across continent-sized Brazil.

Bolsonaro is facing criticism as he struggles to balance a spiraling public health emergency with protecting Brazil’s long-ailing economy.

Approval of his government fell to a record low this week, according to XP Investimentos poll. Just 30% of those surveyed rated his administration “good” or “great,” compared with 36% calling it “bad” or “awful.” A record-high 17% said his government is to blame for the current economic situation.

Many Brazilians have been drumming pots and pans in their homes nightly in protest against Bolsonaro, who initially labeled the outbreak a “fantasy” and ignored medical advice to meet crowds of supporters on Sunday.

Bolsonaro said on Friday the Brazilian economy cannot stop or the country will face a catastrophe. He also ruled out drastic measures like a state of siege and said the closure of airports and roads was not advisable as it would cause panic.

In comments to journalists earlier on Friday, he slammed governors for taking “extreme measures” that hurt the economy.

Sao Paulo state Governor João Doria said a statewide public emergency would go into force on Saturday, aimed at allowing the government to better fight the virus. All parks and non-essential public services will close until the end of April in an effort to slow the spread of the contagion.

Doria defended the move in a pointed jab at Bolsonaro.

“We’re doing what he’s not doing,” Doria said. “And when he does do it, he does it wrong.”

Nose-diving economic projections added to the pressure on the president.

A paper published by the Center for Applied Macroeconomics and Getulio Vargas Foundation (FGV) showed that the worst-case combination of simultaneous international and domestic shocks could see Brazil’s gross domestic product shrink by 4.4% this year.

CHILL IN THE AIR

Bolsonaro said he expected June, a winter month in the southern hemisphere nation, to be the most critical period for the coronavirus outbreak. Health Minister Mandetta said he expected cases to plateau in July and begin to fall quickly in September.

Medical experts told Reuters that although little is known about how changes in seasonal weather will affect this new coronavirus, past outbreaks in Brazil point to colder temperatures exacerbating contagion.

Bolsonaro has banned entry for citizens from China and the European Union, but has held back from closing international airports as Latin American neighbors Colombia, Peru, Argentina and Venezuela have done.

Rio Governor Wilson Witzel on Thursday said he would cancel all international flights in and out of the state, as well as domestic flights to Brazilian states with coronavirus cases.

But airlines and federal regulators said he does not have the power to do it. Infrastructure Minister Tarciso Freitas said the federal government will not close airports and bus stations.

The president also looked to defuse a diplomatic spat with No. 1 trading partner China that began when his son, lawmaker Eduardo Bolsonaro, accused the Asian country where the outbreak originated in December of covering it up.

“There is no problem with China,” Bolsonaro said.