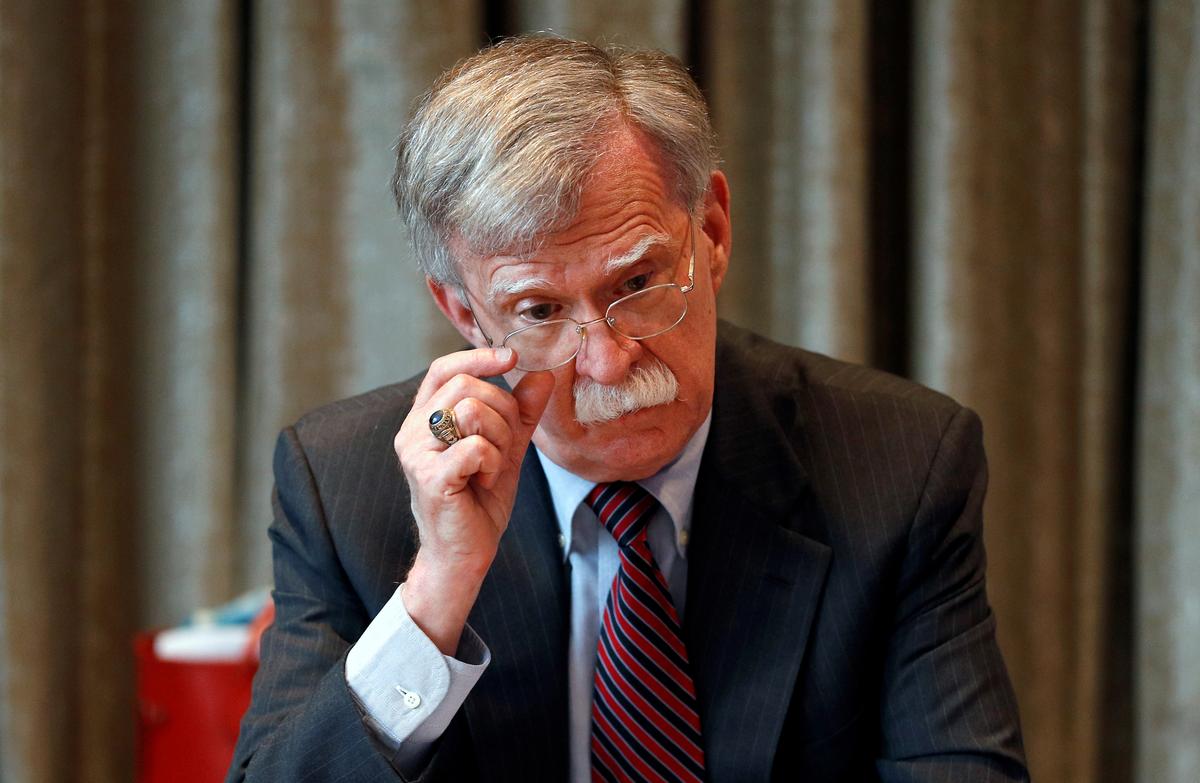 WASHINGTON (Reuters) – John Bolton was always an odd fit to be U.S. President Donald Trump’s national security adviser: a conservative hawk who advocated for regime change in North Korea and Iran, supported the Iraq war and favored a tough stance toward Russia.

The mustachioed hard-liner’s efforts to add bite to the bark of U.S. foreign policy met stiff resistance from a White House leery of foreign entanglements and came to an abrupt halt on Tuesday when Trump announced he had fired him.

Trump said he and others in the administration had disagreed strongly with many of Bolton’s suggestions.

But Bolton, 70, can lay claim to one clear victory during his tenure.

Hanging on a wall in his West Wing office was a memento of that achievement: a framed copy of Trump’s order last year to pull the United States out of the 2015 international nuclear deal with Iran.

Right next to it hung a cartoon mocking the agreement, which was designed to make it more difficult for Iran to develop a nuclear bomb in exchange for international sanctions relief. The Trump administration said the accord secured by President Barack Obama and other world powers did not go far enough in curtailing Iran’s activities.

Bolton’s choice of decor reflected his disdain for the deal and his relentless focus on trying to isolate Tehran and cripple its economy by reimposing tight sanctions.

Bolton became national security adviser on April 9, 2018 and the next month Trump abandoned the Iran deal, meeting a promise he had made as a presidential candidate, which other wary West Wing advisers had persuaded him to put off.

Bolton changed that dynamic quickly. In an interview with Reuters last year, he said he reassured Trump that his instincts were right and that he could ignore the pleas and warnings of moderates and European allies to stay in the deal.

“It’s not the end of the world,” Bolton said he told Trump in arguing for withdrawal from the pact. “The Western alliance is not going to fall apart.”

In Washington’s community of foreign policy veterans, Bolton has been a super-hawk for decades, whether as a tough-talking U.S. ambassador to the United Nations under President George W. Bush or as a prominent analyst on Fox News.

Critics call him an ideologue and a warmonger who retaliates against dissenting views, while allies say he is an intellectual and a shrewd operator committed to ensuring the supremacy of U.S. power.

Over the years, Bolton has advocated for regime change in a number of countries, including Iran and North Korea, opposed direct negotiations with both and said the United States should stage pre-emptive attacks against their nuclear facilities.

He played a central role in the hardening of U.S. policy toward Venezuela’s socialist government over the past year, pushing other countries to help speed up a transition of power in the South American nation.

Bolton did appear to soften some of his bellicose positions, at least in public, after becoming national security adviser, saying he was happy to follow the president’s lead.

That kept him temporarily in good graces with Trump, who has made improved ties with both North Korea and Russia a centerpiece of his foreign policy, and who does not like being overshadowed by his staff.

Bolton was widely believed to have favored a planned U.S. air strike on Iran earlier this year in retaliation for the downing of a U.S. surveillance drone, an action Trump called off at the last minute.

And Bolton had argued against the president’s suggestions of a possible meeting with the Iranian leadership and advocated a tougher approach on Russia and, more recently, Afghanistan.

While Trump has spoken admiringly of Vladimir Putin, Bolton never did that, and accused the Russian president of lying about Moscow’s involvement in the 2016 U.S. presidential election campaign.

Bolton opposed easing of a wide range of sanctions on Russia and was instrumental in Trump’s decision to withdraw last month from a 1987 accord that banned intermediate-range missiles because of what Washington charged was Moscow’s deployment of prohibited nuclear-capable cruise missiles, an allegation Russia denied.