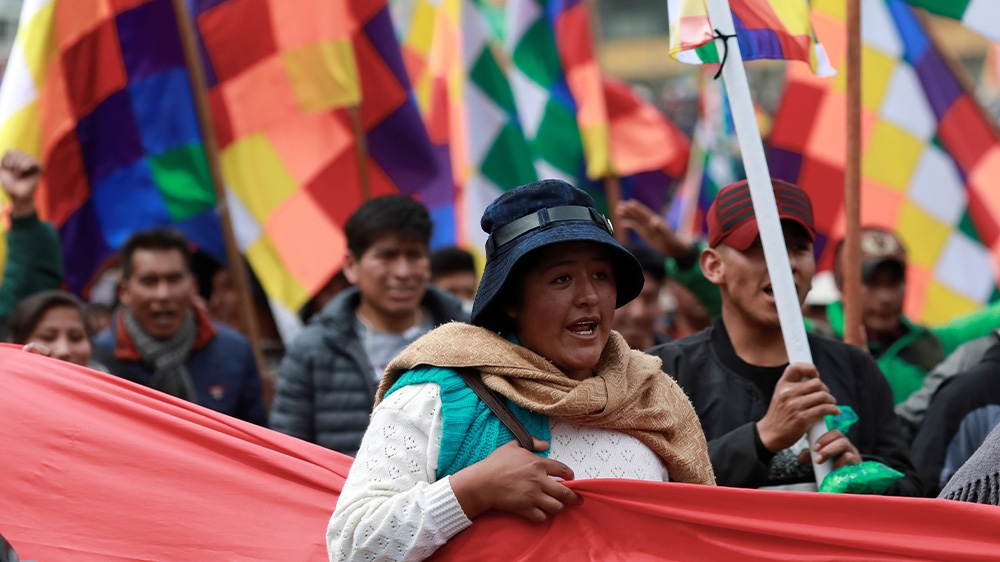 Bolivia’s former President Evo Morales has said he was ready “to return to pacify” his country amid weeks of unrest that led to his resignation, as the United States showed its support for self-declared interim leader Jeanine Anez.

Speaking on Wednesday from Mexico, where he arrived a day earlier after being given political asylum, Morales suggested he could return.

“If the people ask me, we are ready to return to pacify” Bolivia, the left-wing leader said in a news conference.

He also called for a “national dialogue” to resolve the crisis in Bolivia and rejected the legitimacy of the leadership of Jeanine Anez, who declared herself interim president late on Tuesday.

Anez said she planned to call new elections as soon as possible.

On Wednesday, the US announced its backing of Anez.

“The United States applauds Bolivian Senator Jeanine Anez for stepping up as Interim President of State to lead her nation through this democratic transition, under the constitution of Bolivia and in accordance with the principles of the Inter-American Democratic Charter,” US Secretary of State Mike Pompeo said in a statement.

Morales condemned the US’s decision in a tweet on Thursday, comparing it to the country’s recognition of self-declared interim president Juan Guaido in Venezuela and accusing the US of plotting a “political and economic conspiracy” against Bolivia.

The former president resigned on Sunday amid increasingly violent protests over disputed elections that had been held on October 20.

Saying his life was in danger, he fled to Mexico, which sent an air force plane to fetch him on Tuesday.

One day later, however, Morales said his stay would be temporary.

“We’re going to return, sooner or later. The sooner the better, to pacify Bolivia,” he said.

Bolivian ex-President Evo Morales lands in Mexico City, where he was granted exile after his resignation [Pedro Pardo/AFP]

He also repeated the defence of his re-election, calling himself the victim of a “coup”, urging the United Nations to intervene and alleging racism on the part of his opponents.

“My great crime is being indigenous,” he said.

Anez, a 52-year-old deputy Senate leader, said she was taking over the presidency after Morales, his vice president and the leaders of both houses of Congress resigned. She has rejected claims of a coup.

Morales’s backers, who hold a two-thirds majority in Congress, boycotted the session she called to formalise her claim to the presidency, preventing a quorum.

She announced she would be assuming the presidency anyway, saying the constitution did not specifically require congressional approval.

Bolivia’s top constitutional court issued a statement late on Tuesday laying out the legal justification for Anez taking the presidency – without mentioning her by name.

But some legal experts have challenged the technicalities behind Anez’s claim, saying at least some of the steps required Congress to meet – such challenges could affect her ability to govern.

Eduardo Gamarra, a Bolivian political scientist at Florida International University, said the constitution clearly states that Anez did not need a congressional vote to assume the presidency. Even so, “the next two months are going to be extraordinarily difficult for President Anez,” he said.

“It doesn’t seem likely” that Morales’s party “will accept her as president,” said Jennifer Cyr, an associate professor of political science and Latin American studies at the University of Arizona. “So, the question of what happens next remains – still quite unclear and extremely worrying.”

Anez will need to form a new electoral court, find non-partisan staff for the electoral tribunal and get Congress, which is controlled by Morales’s Movement for Socialism Party (MAS), to vote on a new election. All of which must be done before January 22, when Morales’s current term was due to end.

MAS politicians were expected to meet later on Wednesday.