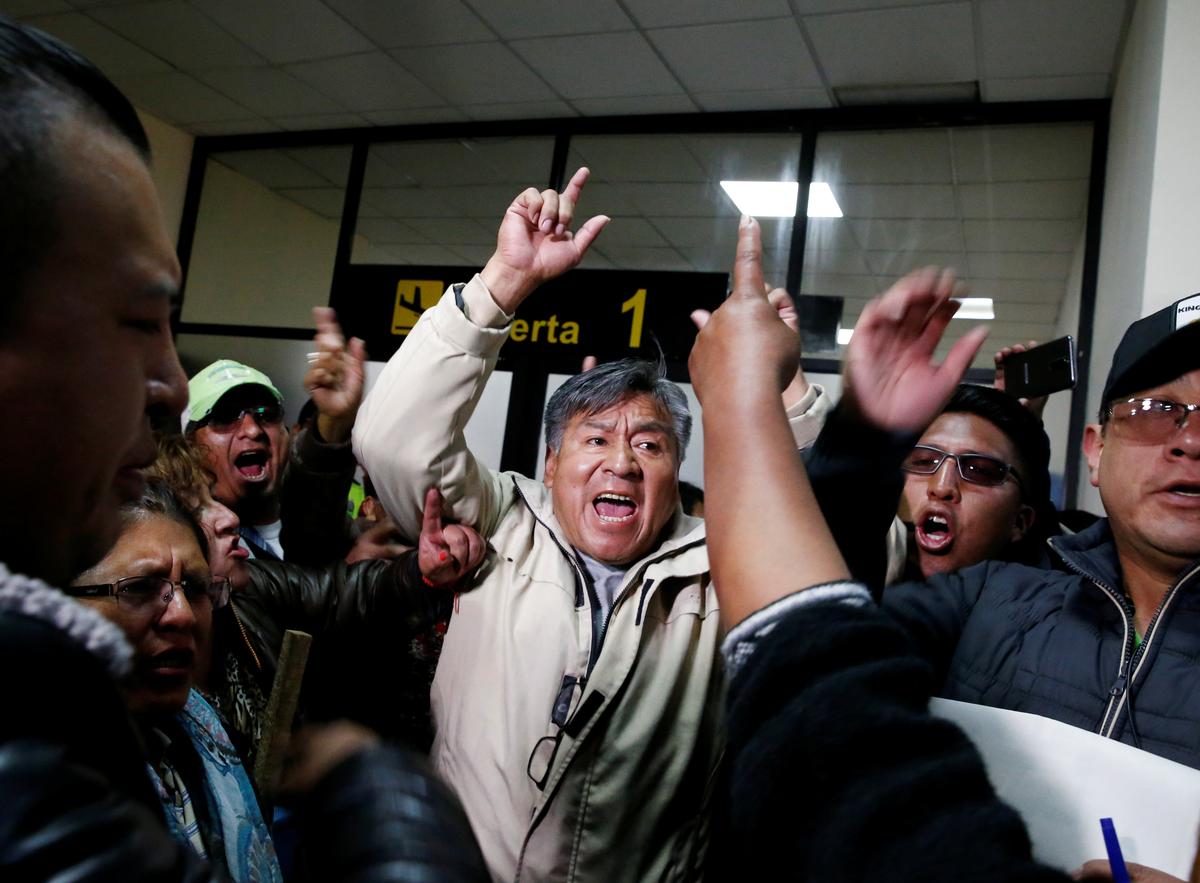 LA PAZ (Reuters) – A Bolivian protest leader vowed on Tuesday to intensify pressure on President Evo Morales to resign as he resisted opposition demands that he step down over contentious election results.

Luis Fernando Camacho, a civic leader who has become a major figure in the opposition, said he would lead a protest march in the capital on Wednesday and push for Morales’ resignation.

Camacho flew from the eastern city of Santa Cruz to La Paz on Tuesday but said officials barred him from leaving the airport for several hours as government supporters massed outside. An air force plane later returned him to Santa Cruz.

Camacho said he will travel to La Paz again on Wednesday and carry a pre-written resignation letter for Morales to sign in an attempt to raise the heat on the president.

“Tomorrow at half past two in the afternoon, I will return to La Paz, and will do so every day until I can enter the government palace,” Camacho told reporters after returning to Santa Cruz.

Other opposition figures continued their calls for Morales to step down after his contentious election win last month pushed the poor landlocked South American country into a democratic crisis.

“We are convinced that we must promote a clear, activist, mobilized, peaceful and democratic action with the absolute clear objective of Evo Morales leaving the government, because he has committed the monumental fraud of not respecting the popular will,” opposition candidate Carlos Mesa said in a press conference.

Jorge Quiroga, a former president of Bolivia, called Morales a “tyrant” and compared his actions to those of Venezuelan President Nicolas Maduro, who stands accused of corruption and human rights violations.

Morales won last month’s vote with a lead of just over 10 points over his nearest rival, giving him an outright win. The victory was marred by a near 24-hour halt in the count, which, when resumed, showed a sharp and unexplained shift in his favor.

The Organization of American States (OAS) is doing a count audit, expected to be completed before the middle of the month. It raised concerns after the count was halted and has recommended a second-round vote.

Morales, who came to power in 2006 as Bolivia’s first indigenous leader, has defended his election win and backed the OAS audit to resolve the crisis, which has seen blockades in cities and street clashes that have caused at least two deaths.

Mesa previously stated he believed the audit would demonstrate clear election fraud and pushed for it to be made binding. But last week he said that he did not trust the audit “agreed between OAS and (Morales’ party) MAS.”

Morales, bolstered by a large crowd of pro-government supporters that he joined on the streets of La Paz, accused the opposition of launching a coup and took aim at Mesa for not cooperating with the OAS audit.

“If you’re sure there was fraud, you should be happy to take the evidence to (the OAS),” Morales said to the crowd.

Meanwhile, the minister of economy said that payments of some social benefits were interrupted as protesters forced closure of some branches of the state bank after Camacho urged supporters on Monday to peacefully jam government institutions.