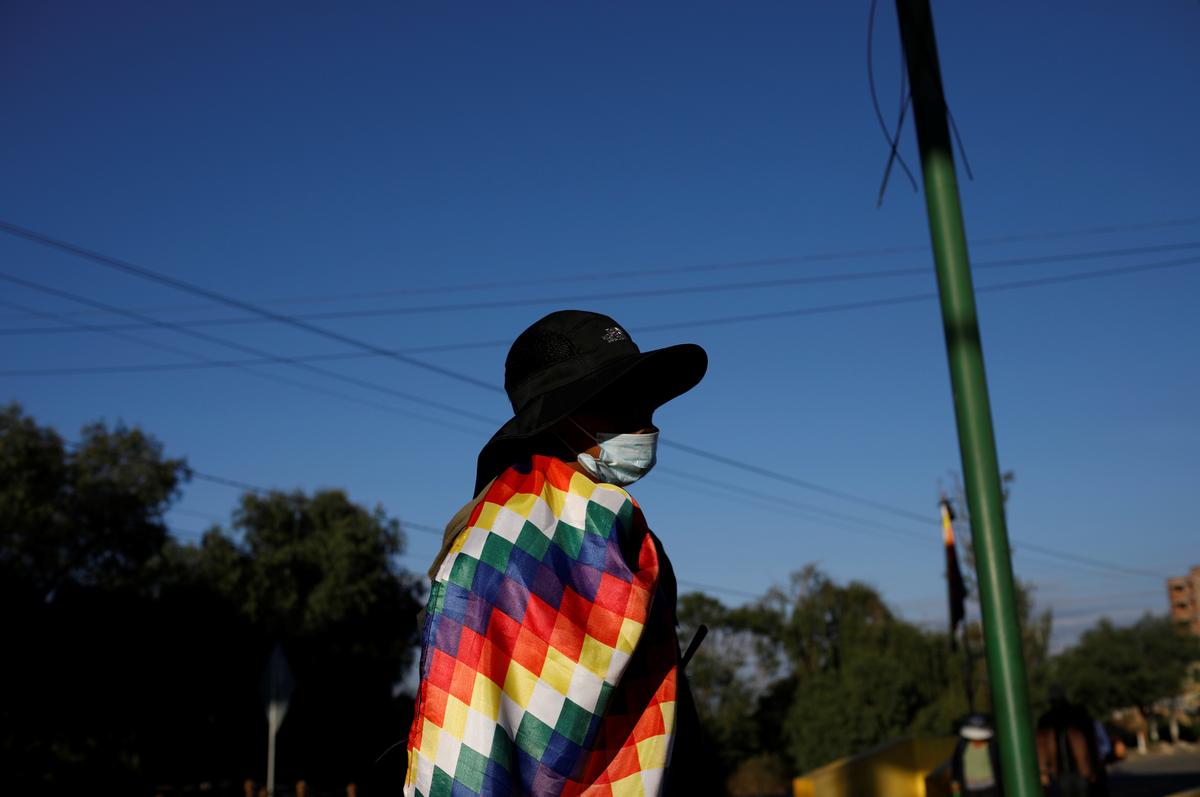 EL ALTO, Bolivia (Reuters) – In the high-altitude Bolivian city of El Alto, perched on barren steppe above the capital, indigenous activists have led the fight for the return of unseated president Evo Morales.

A supporter of Bolivia’s ousted President Evo Morales is wrapped in the Wiphala flag during a memorial for a fellow supporter who died after clashes with security forces, at the entrance of Sacaba, near Cochabamba, Bolivia November 18, 2019. REUTERS/Marco Bello

Others have marched down into La Paz carrying the colorful Wiphala – a checkered flag symbolic of Andean ethnic groups – to pressure conservative caretaker President Jeanine Anez.

El Alto, however, has a more complex story to tell: of fault lines among Bolivia’s many indigenous communities, whose views on Morales are far from uniform in a country already being ripped apart by political divides.

“They tell us we’re Indians: we’re the black race, the cursed race,” said Jaime Pablo, a protest leader from a highland province, as he blockaded the plant supplying La Paz with gasoline, diesel and cooking gas.

Pablo is annoyed about splits with other local indigenous leaders, whom he said were in talks with the government to end protests in return for speedy elections.

“The government wants to divide us. How? They’re grabbing our leaders and ex-leaders, and they’re talking with them… But we’ve determined we’re not going to respect that.”

In El Alto, where military and police punched through the blockade on Tuesday leaving eight dead, many indigenous groups are calling for peace and looking beyond Morales’ rule, with some removing blockades and returning to work.

Morales, Bolivia’s first indigenous leader, fled to Mexico this month under pressure from protests, allies, the police and the military, over allegations of rigging an October election.

Since his Nov. 10 resignation, Bolivia has been in a standoff between opponents, who say he clung to power too long, and loyalists, who say he brought stability and a voice to the poor. Around 30 people have been killed, with blockades leaving cities low on food and fuel.

Morales’ presidency saw economic progress and increased political participation for indigenous peoples, who comprise over 40% of the 11 million population.

But he alienated some who once hailed him as their champion.

Macario Velasquez, a 76-year-old coca, orange and coffee farmer from the mountain region of Yungas, supported Morales but cannot see him returning.

“He’s already gone. We have to look for someone else to vote for now,” he said. “I hope the situation calms down because we need to work, pay debts. The children need to go to school.”

Morales’ opponents claim he stoked ethnic divisions, lavishing benefits on his own Aymara people, while ignoring smaller groups and the large mixed-race population.

Allies deny that and Morales could not be reached for comment.

Yet many in Bolivia say ethnic differences are increasingly irrelevant, with ever more indigenous people reaching the upper echelons of business and politics.

“The middle class today, if you look around, is incredibly diverse,” said Felix Patzi, Aymara governor of greater La Paz, who opposes Morales.

Nonetheless, indigenous support for Morales, particularly from the Aymara, is a driving force in the challenge to Anez’s interim government, with daily marches.

The 52-year-old former senator angered many with quick moves to draw a line under Morales. She appointed a cabinet initially composed almost entirely of non-indigenous people, while making Christianity central in ceremonies.

Old Tweets disparaging indigenous ceremonies resurfaced, before being deleted, while she cut ties with Morales’ leftist allies, including Venezuela and Cuba.

“She talks so much of democracy but she raises the Bible with one hand, and uses her other hand to throw stones at us,” said Sonia Marka, a farmer dressed in a traditional “pollera” dress, who walked over four hours to demonstrate in La Paz.

Anez says she is focused only on new elections and denies racism. Her supporters note Morales’ last cabinet only had three indigenous members.

The Wiphala – often displayed during Morales’ government next to Bolivia’s tricolor flag – has become a symbol for indigenous opposition. In response, some police cut it from uniforms, prompting an apology from a senior officer.

“There’s been a lack of respect for the Wiphala,” said Josue Pillco, a construction worker from La Paz, who said he was shot by police with rubber bullets while walking back from work.