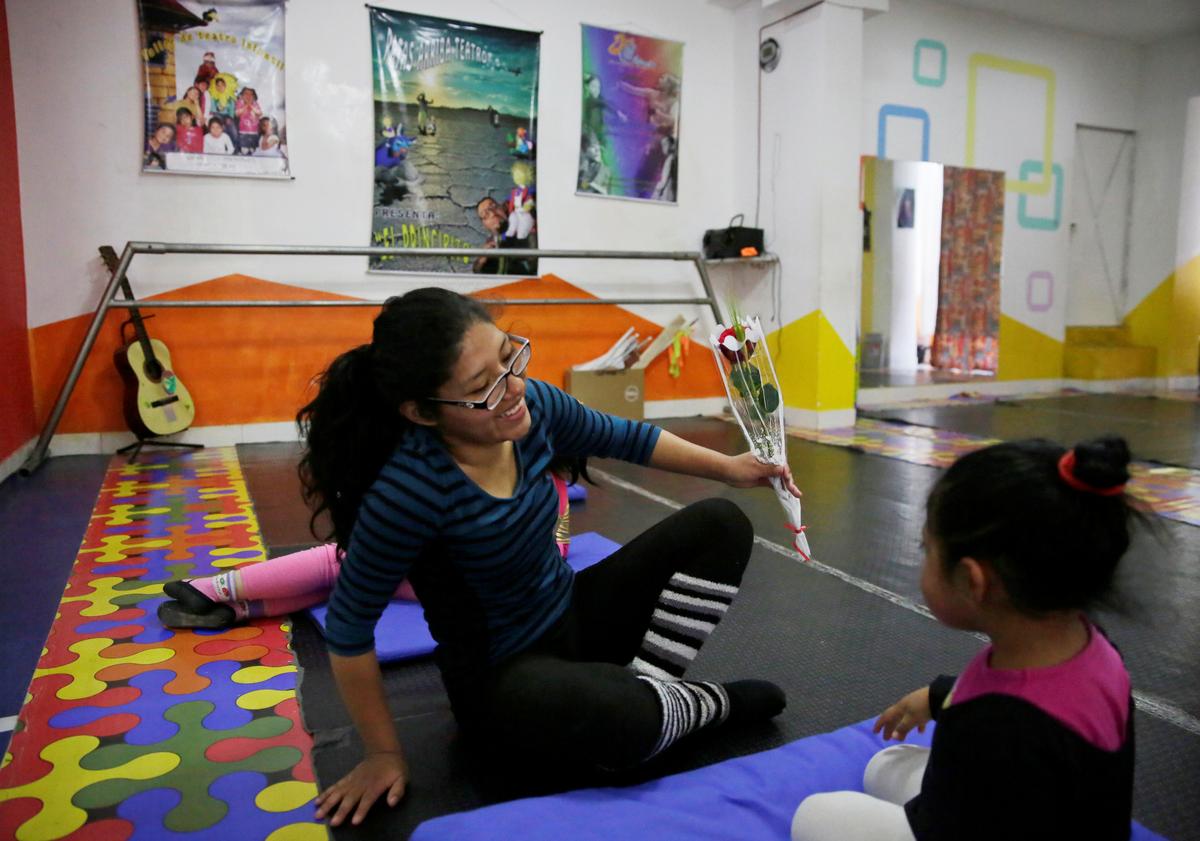 FILE PHOTO: Bolivian Yubinca Villena, a dance teacher who is in favor of the re-election of President Evo Morales, receives flowers from a girl at a studio in La Paz, Bolivia October 11, 2019. REUTERS/David Mercado

Kantuta’s father, an Aymara Indian, migrated from a drought-stricken Andean village at just 15, a journey that forced him to eat discarded banana peels to survive and that ended in the capital La Paz, where he often faced humiliating discrimination.

Today, thanks in part to government scholarships for university students and improved prospects for the country’s non-white population, Kantuta has a formal job, speaks English, plays the guitar and plans to start his own business someday.

But Kantuta is not planning to vote for Morales in Sunday’s presidential election, a referendum on the iconic leader after nearly 14 years in power.

Morales did not bring enough change, he said. Kantuta’s mother died of cancer that his family couldn’t afford to treat at public hospitals. He says he was repeatedly asked for bribes when he tried to get a public sector job. Now that he reads up on the economy, he worries Bolivia might be headed for the kind of crises that have gripped Venezuela and Argentina.

“What he wants is power, not the well-being of the country,” Kantuta said of the president. “Evo Morales only tends to help those who support him.”

Morales’ hopes of securing a fourth term will rest in part on voters like Kantuta, one of more than 2.5 million Bolivians aged 30 or younger – more than a third of the electorate – whose teenage and adult lives have all been lived under a single leader.

This “generation Evo” is a reminder of how long Morales has been in power. He’s already the longest continuous-serving standing president in Latin America and if he wins would extend his rule to almost two decades.

The fact he is running at all is contentious. He was authorized by a court ruling to campaign again despite term limits and a national referendum that barred him.

An early August poll showed support for Morales at its weakest among younger voters, a sign of rising pressure on the president. Opinion polls suggest he is still ahead of main rival Carlos Mesa, but he may be forced into a run-off vote for the first time.

For other Bolivian youth, it’s hard to imagine life without their colorful leader. This generation grew up in a rare period of economic and political stability, helped by a resources boom, and many see Morales as the force behind ensuring the benefits are widely distributed.

The leader, who often goes simply as “Evo”, has guided some of the best economic growth in the region, annually around 4.5%, lifted millions out of poverty and given a voice to marginalized indigenous groups.

“Bolivia is now totally sovereign and there’s economic stability that you can really see,” said Yubinca Villena, a 24-year-old linguistics student and ballet teacher, adding that if Morales was defeated much of that progress could be lost.

Milenka Siles, a 19-year-old nursing student, said Morales deserved credit. She said her first memory of Evo was of a president whom no one thought could succeed because, like many in Bolivia, he was indigenous and came from a poor background.

“He proved them wrong,” said Siles, who plans to cast her first vote ever to keep him in power.

In the capital La Paz and around the country, Morales commands a cult-like status with many young people – for better or worse.

Kantuta said that when he leaves his house, he sees Morales’ face or name emblazoned in public spaces such as town squares and along transport routes, as many as 20 to 30 times per day.