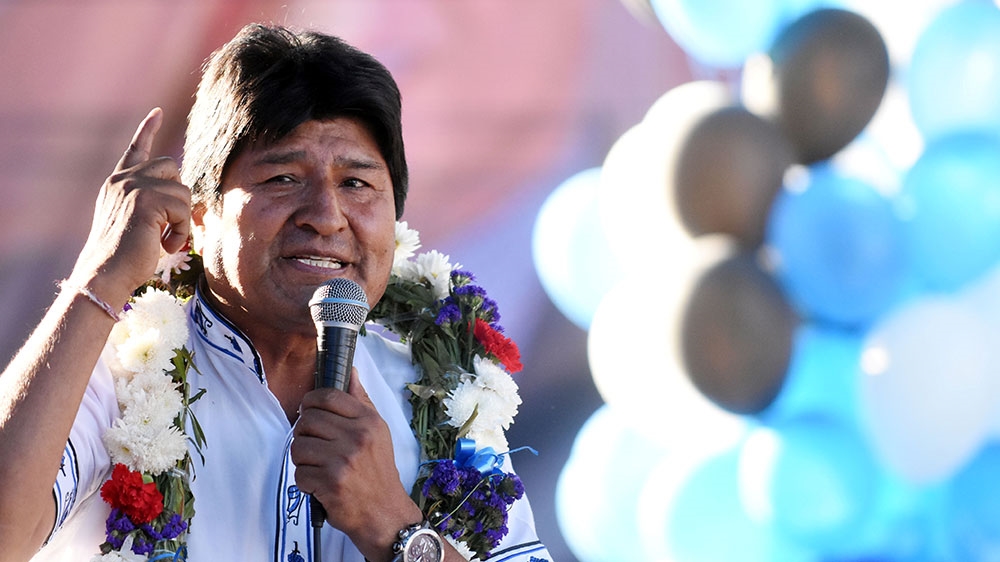 Bolivians will head to the polls on Sunday to vote on whether to give a controversial fourth term to President Evo Morales, the country’s first indigenous and longest-serving leader.

Morales, a left-wing union leader and former coca farmer who is widely credited with boosting the economy and slashing poverty in South America’s poorest country, coasted to victories in previous elections.

But polls this time show a tight race, amid widespread discontent over Morales’s reluctance to leave power, corruption scandals and allegations that he has not done enough to protect the environment.

“For the first time since 2005, when Morales was first elected president, he could lose,” journalist and political analyst Raul Penaranda told Al Jazeera.

While opinion polls show Morales leading, they also indicate he may not be able to secure the 40 percent minimum needed to win in the first round. Candidates also need to have a 10 percent lead over their second-place rival to avoid a runoff vote in December. The winner will take office in January.

Analysts say a runoff could be detrimental to Morales’s chances of securing a fourth term.

“In a second round, everything will be much more difficult for Morales,” Penaranda said.

“He could lose as the opposition will de facto unite against him.”

The 59-year-old leader of the Movement for Socialism Party (MAS) has riled Bolivians by insisting on running for another five-year term, despite a 2016 referendum that ruled against his proposal to extend term limits.

He was able to run after the country’s highest court ruled that term limits would violate his human rights.

The decision set off protests and strikes across the country, with opponents arguing the move was unconstitutional.

Last year, he built a new presidential residence: A towering 29-story highrise in the administrative capital La Paz worth $34m.

And in September, he built a $7m museum dedicated to himself in his hometown of Orinoca.

Many voters are also outraged over his government’s response to the wildfires this year that have consumed large swathes of the country’s forests. Critics argue that the wildfires are partly the result of policies that have made it easier for farmers to clear land for cultivation.

Hundreds of thousands took to the streets demanding Morales declare the fires a national disaster to help facilitate international aid.

But his government refused, saying that declaring an emergency would invite foreign meddling in a sovereign issue.

Among the eight candidates challenging Morales, former President Carlos Mesa appears to have the best chance at unseating the leader or forcing a runoff vote.

Mesa, 65, is a former journalist and historian. He leads the Citizen Community alliance and is predicted to win about 27 percent of the vote in the first round.

Jim Shultz, executive director of the Democracy Center, says Mesa is the most serious challenger Morales has ever faced.

“Mesa is an intelligent and moderate candidate with a lot of middle-class support,” Shultz said.

“He also commands the support of people who are disenchanted with Morales,” he told Al Jazeera.

During his campaign, he accused Morales of authoritarianism and pledged to restore democracy to the country’s institutions.

I think we are left with very few options. We have a president who wants to remain in power unconstitutionally and a very weak opposition.

“Because unfortunately, we have a government that controls all powers including electoral power,” Vargas Beltran said.

Pundits, however, point to the fact that the opposition remains deeply divided and that if Mesa wins, he will preside over a weak government.

“I think we are left with very few options,” said Sara Jauregui, 30, a graphic designer in La Paz.

“We have a president who wants to remain in power unconstitutionally and a very weak opposition,” she said.

Still, despite growing anger over his re-election bid, Morales enjoys considerable support in Bolivia. He is credited with ushering in unprecedented economic prosperity and lowering inequality.

Unlike neighbouring countries, Venezuela, Argentina or Brazil, which are suffering from severe economic downturns, Bolivia’s economy has grown an average of 4.6 percent since Morales took office, largely as a result of his moves to nationalise the oil and gas sectors and high commodity rates.

Last year, the poverty rate in the country stood at 36.4 percent, compared with 59.9 percent in 2006 when Morales took office, according to the World Bank.

John Crabtree, a researcher at the University of Oxford, said that although Morales has seen his popularity drop among the middle class and young voters, as well as in large cities, he maintains strong support among the indigenous populations and from his base in rural areas.

“His popularity has waned a bit, but it is not the case that large numbers of people are desperate to get rid of him.”

With additional reporting by Monica Garcia in La Paz.