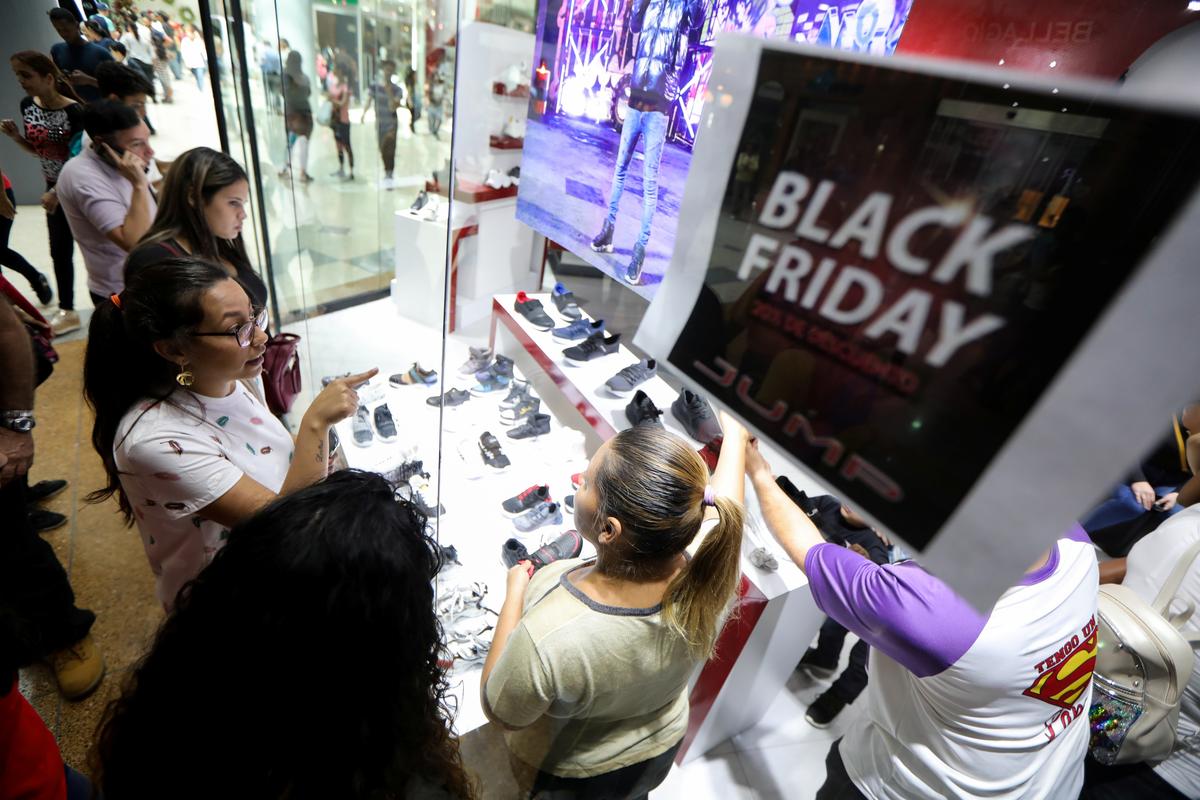 CARACAS (Reuters) – Venezuelans flocked to shopping centers in Caracas, the country’s largest city, on Friday to take advantage of the first “Black Friday” discounts in recent memory, as socialist President Nicolas Maduro’s government loosens controls in the face of an economic crisis.

People watch products outside a store at a mall during the Black Friday sales in Caracas, Venezuela November 29, 2019. REUTERS/Manaure Quintero

For the first six holiday seasons of his presidency, Maduro attempted to keep consumer goods prices low despite galloping inflation with strict enforcement of price controls. This year, with the OPEC nation facing crippling U.S. sanctions on its oil industry, the government has left retailers more or less alone.

“My sister saw it on social media and said, ‘Look, there are 70% discounts at the Sambil,’ and we came running,” said Elizabeth Diaz, a 42-year-old bank worker from the city of Los Teques some 35 km (22 miles) from Caracas’ Sambil mall, where she was waiting in line outside a toy store to buy gifts for her three grandchildren.

“Discounts are the only way, because with prices through the roof one can’t afford anything,” she said.

Malls and small retailers across the country advertised discounts of up to 80% on goods from shoes to electronics, hoping an influx of Christmas shoppers could compensate for weak sales so far in Venezuela’s sixth straight year of economic contraction.

In January, the government said it would make price controls more “flexible” and loosen a complex, longstanding system of currency controls. That has led to a wider circulation of foreign currency, as Venezuelans turn to the dollar to protect their earnings against a fast-devaluing local bolivar.

The reforms, however, have not revived the economy. Inflation in the nine months through September was 4,680% while commercial activity fell 39.2% in the first quarter compared with the same period last year, according to the most recent central bank data. A migration wave that has seen more than 4 million Venezuelans flee the country has continued unabated.

But the contours of Venezuela’s economic crisis have shifted. While price controls once led to bare supermarket shelves and long lines, stores are now better stocked but with goods whose prices are far beyond the reach of those who earn the minimum wage of less than $10 per month.

“Sales are down 50% so far this year, so we decided to do Black Friday to get people excited and boost sales,” said Rosmary Mogollon, 42, who works at a shoe store in Maracaibo, Venezuela’s second-largest city, which has been hard-hit by blackouts and gasoline shortages this year.

Stores in the western city of San Cristobal joined the rest of the country in offering discounts, but thousands of its residents streamed across the Colombian border to go shopping in the nearby city of Cucuta, where Black Friday has long been a mainstay.

But in the rest of the country, Reuters witnesses and retailers said attendance was above average for normally moribund shops – though a far cry from the frenzy often associated with the event elsewhere in the world.

“It’s a way for people to forget about the gasoline lines and the whole crisis,” said Maria Sakhr, who works at a toy store in the western city of Barquisimeto that was offering 20% discounts.