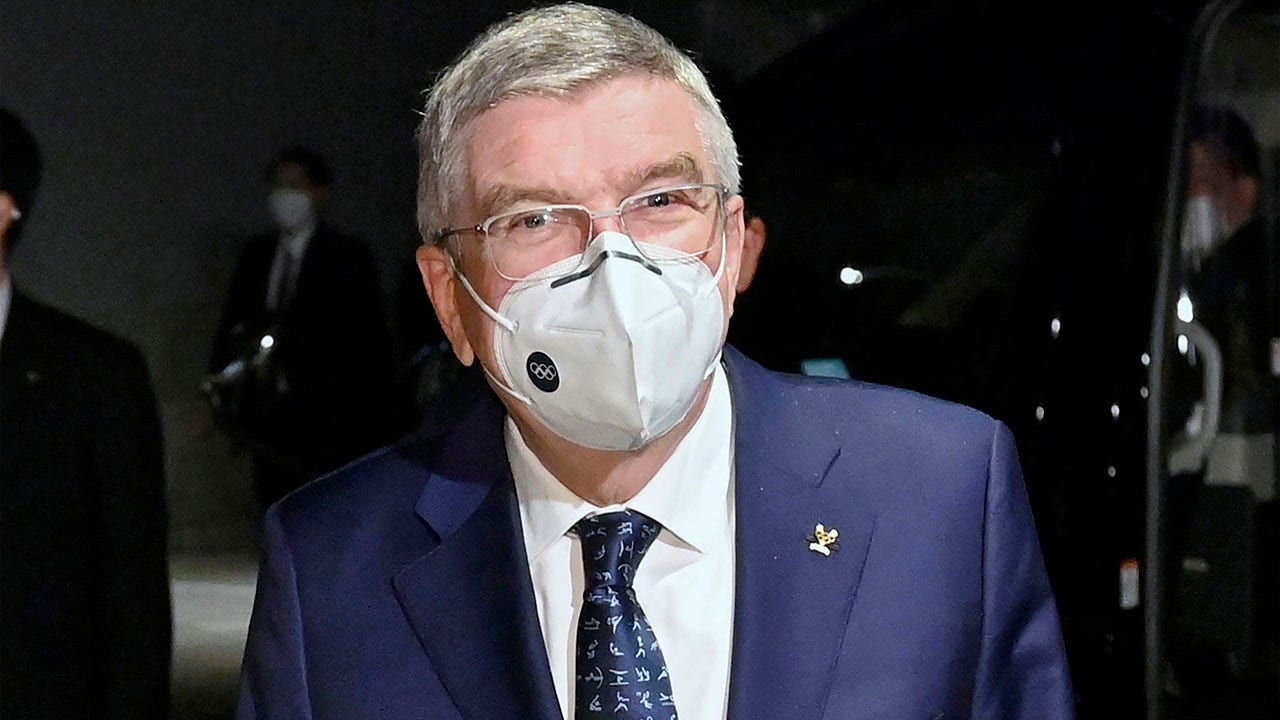 Olympic “participants” and fans arriving for next year’s postponed Tokyo Games will be encouraged to be vaccinated to protect the Japanese public, IOC President Thomas Bach said Monday.

Bach said it won’t be mandatory, but he left no doubt it will be strongly pushed.

BACH COMES TO TOKYO AS CHEERLEADER FOR NEXT YEAR’S OLYMPICS

Bach campaigned across Tokyo on Monday, his first visit to Japan since the Olympics were postponed almost eight months ago amid the coronavirus pandemic. He met support at all stops; from Japanese Prime Minister Yoshihide Suga, Tokyo Governor Yuriko Koike, former Prime Minister Shinzo Abe, and Yoshiro Mori, the head of the local organizing committee and also a former prime minister.

“In order to protect the Japanese people and out of respect for the Japanese people, the IOC will undertake great effort so that as many (people) as possible — Olympic participants and visitors will arrive here (with a) vaccine, if by then a vaccine is available,” Bach said after talks with Suga.

“We want to convince as many foreign participants as possible to accept a vaccine,” Bach added later after meeting with Mori. “This makes us all very confident that we can have spectators in the Olympic stadia next year and that spectators will enjoy a safe environment.”

Bach lauded new advances in rapid testing as a boost to hold the games. He said Olympic participants would not be a priority for a vaccine ahead of “nurses and doctors and people who keep our society alive.” And he repeated several times that next year’s Olympics would be the “light at the end of this dark tunnel.”

WITH COVID-19 SURGING, SWIMMERS RETURN TO RACING IN THE US

Bach suggested the IOC would cover at least some of the costs of vaccination. But he said he did not yet know how much the one-year delay would cost. Reports in Japan estimate it will be $2 billion to $3 billion.

“This will take time,” he said. “It’s impossible now to have a sound figure.”

The most pointed question at a news conference with Bach went to Mori concerning a reported $1 million payment from the Tokyo bid committee — which landed the Olympics in 2013 — to the Jigoro Kano Memorial International Sports Institute. Mori heads the body.

Sitting next to Bach, Mori said he did now know about the body’s finances.

“That is not something that I directly oversee,” he replied.

French authorities have been investigating a bribery scandal linked to Tokyo’s winning bid. Last year, Japanese Olympic Committee president Tsunekazu Takeda was forced to resign after he acknowledged signing off on a $2 million payment to a consulting company based in Singapore. The consultant is believed to have channeled money to influence IOC votes.

Monday was the first of two days of non-stop meetings for Bach in Tokyo; photo opportunities and meetings with politicians and organizers aimed at persuading a skeptical Japanese public that it’s safe to hold the Olympics during a pandemic.

The Olympics are scheduled to open on July 23, 2021, and Bach said he hoped to have a “reasonable number” of spectators at the venues. How many and from where is a decision that is still down the road.

A possible vaccine was announced last week by Pfizer Inc., which could greatly help the IOC and local organizers stage the Olympics. There have also been advances in rapid testing.

All of this is taking place as cases around the world surge heading into the Northern Hemisphere winter. Bach traveled to Tokyo on a chartered flight. He called off a trip last month to South Korea because of the virus’ spread in Europe.

Some athletes and fans from abroad may oppose any suggestion to take the vaccine, which Bach has hinted previously could be key for Olympic “solidarity.”

Japan has held baseball games recently with near-capacity crowds of 30,000 fans at some stadiums. It has also held an exhibition gymnastics meet with 22 athletes entering from abroad, attended by several thousand fans.

Japan has been largely spared during the pandemic with about 1,900 deaths attributed to COVID-19. It has also sealed off its borders until recently, and has almost 100% mask-wearing by the public.

CLICK HERE TO GET MORE SPORTS COVERAGE ON FOXNEWS.COM

Several polls have shown the Japanese public is ambivalent about the games, facing larger concerns like a slumping economy.

“Our determination is to realize the Tokyo Games next summer as proof that humanity has defeated the virus,” Suga said.

The IOC gets 73% of its income from television, which is a critical factor in its drive to hold the Olympics. American network NBC pays well over $1 billion for every Olympics.

Costs are also an issue with the Japanese public. A government audit report last year said the bill for preparing the Olympics could reach $25 billion. All but $5.6 billion is public money.