Posted By: admin 12 months ago 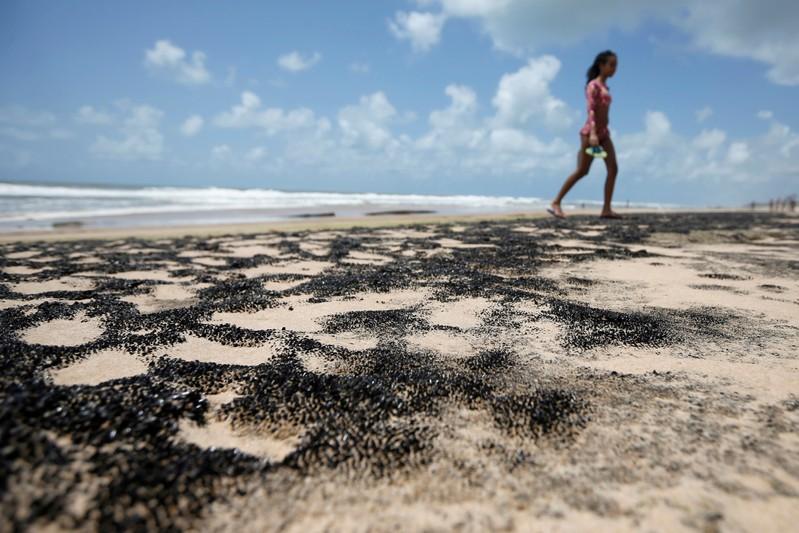 RIO DE JANEIRO (Reuters) – As executives gather in Rio de Janeiro ahead of a blockbuster offshore oil auction, a mysterious crude spill is raising questions about whether Brazil’s oil industry is growing faster than the government’s ability to police it.

For two months, a thick, crude sludge has been washing up on the beaches of northeastern Brazil, a poorer region dependent on fishing and tourism. Last week, the government said more than 600 tonnes of it had been collected from the coastline.

The environmental disaster is a black eye for Brazil on the eve of one of the highest-grossing oil auctions ever, in which the government aims to rake in more than $25 billion from global oil companies, cementing the country’s status as the hottest play in Latin America for Big Oil.

Monitoring and responding to incidents in deepwater fields hundreds of miles off the coast represents a challenge for any government, but critics say Brazil’s ineffective handling of the crisis on its northeastern beaches has been especially alarming.

Prosecutors, politicians and environmental groups have blasted the government for what they call a slow and fumbling response. In many cases, residents have cleaned local beaches by hand, rolling up globs of oil and stuffing them in trash bags, only to fall sick from exposure.

“We received various reports from towns that were being affected by the oil, and they told us they needed more support to protect their ecosystems,” said Cristina Graça, a prosecutor in Bahia state, who has criticized the government’s response.

“We saw in some towns … people were doing the clean-up work with no equipment or with no training.”

Brazil has an official contingency plan for oil spills, but the government said it was not activated until early October, more than a month after the oil started washing ashore.

Brazil has also struggled to pinpoint the source of the spill, beyond saying it came from Venezuelan fields, raising further questions about the government’s ability to investigate such incidents.

“I’m not impressed. The country has a (contingency plan) … It seems to have been basically a paper plan,” said Gerald Graham, an oil-spill response expert based in British Columbia. He said local residents cleaning the oil off beaches were likely exposing themselves to long-term health risks.

“In general, it looks to be a haphazard response,” he added. “Who are we going to hold responsible for that other than the Brazilian government?”

Government officials have said they are taking the spill seriously, blaming the unusually heavy crude and its unclear origin for the difficulties confronting the cleanup.

Mines and Energy Minister Bento Albuquerque pushed back at the idea that the government was slow to react, adding that “all available resources” were deployed to clean up the oil.

At the same conference, the head of Brazilian industry group IBP said authorities had sent collected oil to labs in France and Norway to help discover its origin.

Even in cases where the origin of oil spills has been clear, environmentalists argue that Brazilian courts and regulators are slow to hold offenders responsible.

This month, prosecutors in Rio de Janeiro filed a suit against state-run oil firm Petroleo Brasileiro SA and its distribution subsidiary, Transpetro, for an oil spill near the tropical island of Ilha Grande in 2015.

The accident occurred during a so-called ship-to-ship transfer, a maneuver is which oil is transferred between vessels via high-pressure hoses.

Experts say such a maneuver, which is lightly regulated in Brazil, is one possible cause of the spill affecting the nation.

“It’s interesting to think about this spill affecting Brazil’s northeastern coast,” said Ígor Miranda, a federal prosecutor on the case. “There is a theory that it happened during a ship-to-ship transfer, which shows the dangers of environmental damage associated with this kind of activity.”

Petrobras, Transpetro and Inea said they had not been formally named in court documents. Petrobras and Transpetro said they would take the appropriate measures when the lawsuit is formalized.

Petrobras added that respect for the environment is a company value, and that “all available resources are used to mitigate possible impacts” when spills occur.