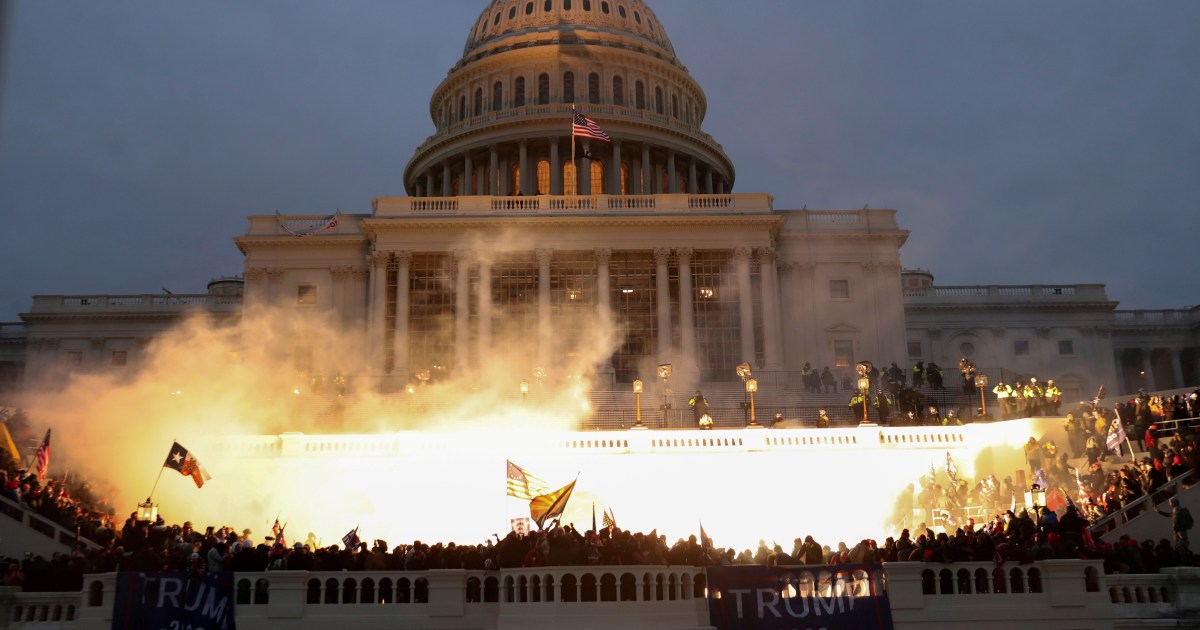 An explosion caused by a police munition is seen while supporters of US President Donald Trump gather in front of the US Capitol Building in Washington, DC on January 6, 2021 [Reuters/Leah Millis]

If the past four years of the Donald Trump presidency had dented America’s carefully cultivated – if inaccurate – reputation as a bastion of democracy, the November 2020 election, its aftermath and, especially the events of January 6 have completely destroyed it. As a shocked world tried to make sense of the scenes of a mob storming the US Capitol, many journalists seemed at a loss about what to call it. A coup? A revolution? The chosen terms reflect not just the particular reporter’s ideological bent but also their fundamental understanding of what the United States is.

Normally, the sight of unarmed and largely peaceful protesters occupying public buildings to protest rigged elections would be branded “people power” or colour revolutions. This, however, was different.

Whether it is the Philippines in 1986 or Ukraine in 2004, pro-democracy demonstrations against election fraud are usually directed against authoritarian leaders clinging to power, not orchestrated by them. They tend to be reactions to clear instances of stolen elections, not fantastical conspiracy theories involving dead presidents in Venezuela.

Their objectives tend to go beyond narrow demands for individuals taking power and include wider systemic reform. They also tend to be the culmination, rather than the beginning, of lengthy campaigns of resistance to dictatorship and brutality.

None of that is the case here. Trump’s chief grievance against last year’s election is that he lost. While there was much that was objectionable about the election, despite official protestations endlessly repeated by media, that the elections were perfect, it was not a genuine concern about gerrymandering of electoral districts or voter suppression that motivated Trump and his fans.

The reaction of the police was telling as well. While there is euphemistic talk that Capitol police were outnumbered and overwhelmed, it is clear there was an extreme reluctance to take any forceful actions with the protesters given free rein of the building for hours.

Genuine protest movements rarely enjoy such moments of cooperation from the cops. One thinks, for example, back to the brutality with which the 2020 Black Lives Matter protests were met. By comparison, on January 6, the police positively rolled out the red carpet for the primarily white demonstrators on Capitol Hill.

While these were not people power protests, we should beware of other labels that the US and international press attempted to pin on them. Two of them were “terrorism” and “coup”. Neither fit the bill.

Many would argue that “terrorism” is the use of violence to terrify society or a group for the purposes of achieving a desired political outcome. And it is true that there were elements of this at the Capitol. The mob may have sought to intimidate members of Congress into rejecting the certification of Joe Biden’s electoral win. However, not all acts of political intimidation which include an element of violence should count as “terrorism”, else the concept would lose much of its power and relevance from simple overuse.

Similarly, describing this as an attempted coup is a bit over the top. Coups are almost never carried out by incumbent executives. Rather, they tend to be their targets. And it seems far-fetched to assert that the people storming Parliament aimed to take over the government

So what was it? It began life as a protest and ended up as a riot. But more importantly, it was an advertisement – a reminder to the world and especially to Americans themselves, that, despite its pretensions to exceptionalism, the country remains at heart, a very ordinary, deeply flawed democratic experiment. “This is not who we are,” Biden may have declared, but the facts do not live up to the rhetoric.

The expressions of shock in media reports and international reactions say less about the US than about those expressing them. This, after all, is not the first time white mobs have invaded public buildings and sought to intimidate public officials in the US. In April, an armed mob invaded the state capitol building in the state of Michigan and there were armed groups of protesters targeting election officials after the November 3 vote. This is exactly what America, or at least a part of it, is.

The Trump era may be a norm-busting extreme but it remains resolutely and fundamentally American, going down the road that the US has been on for a long time. The widespread failure to acknowledge this reflects just how successful the country’s propaganda efforts have been at perpetuating the myth of “the shining city on the hill” ordained by history to guide the rest of the world.

This beguiling vision has long prevented many across the planet and within the country from apprehending just how grotesquely flawed it had become. Becoming aware of this would change how the rest of the world talks about the country (and the West in general) and lead to less confusion about how to describe events there. For Americans, on the other hand, it would be the first step in the necessary journey of self-discovery which they have successfully managed to avoid so far.