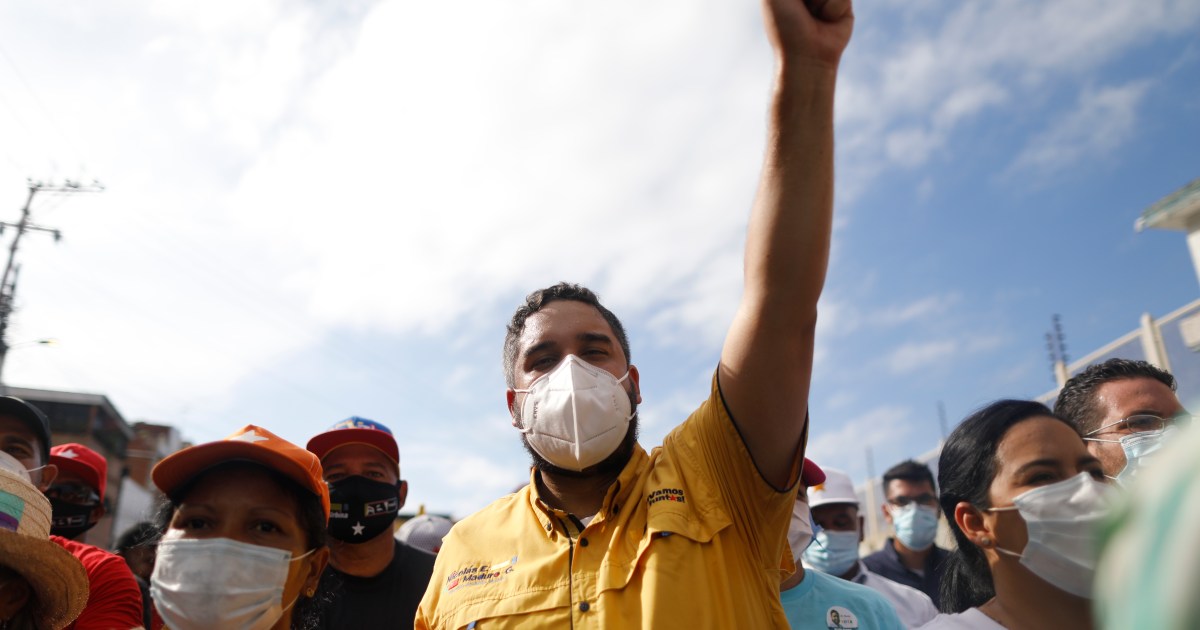 For most of his life, Venezuelan President Nicolas Maduro’s only son has lived quietly in the shadow of his father, trying to dedicate himself to music even as he took tentative steps into politics.

But Nicolas Ernesto Maduro Guerra is now stepping further into the political spotlight. He is campaigning for a seat in Venezuela’s congress, the last institution that had been out of the governing socialist party’s grasp, in a Sunday election that the US and dozens of other countries see as a move by his father to tighten an illegitimate grip on power.

The 30-year-old politico – commonly called “Nicolasito“, or Little Nicolas – spoke with The Associated Press news agency ahead of the vote about life with his father, as well as denying US allegations of corruption.

Supporters of Nicolas Maduro Guerra, son of Venezuela’s President Nicolas Maduro, participate in a political rally to show their support, as the president’s son campaigns for a spot in the National Assembly for the upcoming December 6 midterm elections [Ariana Cubillos/AP Photo]“We have thick skin, like a crocodile,” he said, pinching one of his arms and dismissing critics. “They’ve said everything they can think of about me, but there’s never proof.”

Maduro Guerra, the president’s son from his first marriage, studied economics in college, but his lifelong passion has been music as an accomplished flute player.

He is running for a congressional seat representing the coastal region of La Guaira, home to Venezuela’s main international airport just outside the capital of Caracas. He and his stepmother, First Lady Cicilia Flores, were nominated as candidates for the United Socialist Party of Venezuela.

Nicolas Maduro Guerra said his interest in politics was sparked while he was a student at the governmental National Experimental Polytechnic University of the Bolivarian Armed Forces [Ariana Cubillos/AP Photo]The election to fill 277 seats is being boycotted by his father’s adversaries, who claim it is rigged because there are no guarantees it will be fair. The United States and European Union also rejected the vote.

Until his father became president in 2013, the younger Maduro participated in the governing party’s wing and also served as director of the National System of Youth and Children’s Orchestras and Choirs.

He said his interest in politics was sparked while he was a student at the governmental National Experimental Polytechnic University of the Bolivarian Armed Forces.

Nicolas Maduro Guerra is running for a congressional seat representing the coastal region of La Guaira, home to Venezuela’s main international airport just outside the capital of Caracas [Ariana Cubillos/AP Photo]In 2017, he was elected to the National Constituent Assembly, a legislative body created by Maduro’s government to circumvent the opposition-controlled congress, the National Assembly.

In his first year in that body, the son became the target of ridicule after countering President Donald Trump’s suggestion of military force to overthrow the elder Maduro. “The rifles would reach New York, Mr Trump,” Maduro Guerra said. “We would arrive and take the White House.”

Nicolas Maduro Guerra said he is close with his father, Venezuelan President Nicolas Maduro, and described his upbringing as modest [Arian Cubillos/AP Photo]Luis Vicente Leon, president of the Caracas-based polling firm Datanalisis, said Maduro Guerra does not appear to be a popular figure who might have a bright future in politics, noting that his father has little political currency to share with a popularity rating of about 15 percent.

Maduro Guerra said he is close with his father and described his upbringing as modest.

“He was always there for me,” the son said. “I have always been there for him.”

His parents separated when he was two years old, and Maduro Guerra said he decided at a young age to live with his father. He said his father encouraged him to pursue baseball rather than music, but he recalled sneaking off the field to practice the flute.

The last two months of campaigning have pulled him away from music, he said, adding that he plays now only when his two young daughters beg him for a tune.

His interest in politics came from his father, he said.

“That happened because of the fact of always being with my father and watching him in action,” Maduro Guerra said.

Nicolas Maduro Guerra was elected to the National Constituent Assembly in 2017, a legislative body created by Maduro’s government to circumvent the National Assembly the opposition-controlled congress [Arian Cubillos/AP Photo]The president’s political tangles have brought accusations of corruption against the son. In 2019, Washington sanctioned him among others in the president’s inner circle. US Treasury Secretary Steven Mnuchin at the time accused “Nicolasito” in a statement of profiting off his father’s corruption at the cost of millions of poor Venezuelans.

Denying that charge, Minister of Higher Education Cesar Trompiz said he thinks of Maduro Guerra as the disciplined and creative young man he has known as a friend for years. There is no substance to the attacks from Washington, Trompiz said.

“We often ask ourselves, ‘Where are all the things he has?’ to see if we can enjoy them, too,” Trompiz quipped. “In reality, they write a lot of garbage about him in the press.”

With an almost assured congressional win come claims that Maduro Guerra is being groomed as the heir to his father, just as the elder Maduro was hand-picked by the dying President Hugo Chavez to be his successor. It also raises claims of nepotism.

“Sometimes people will say that,” the son said. “I don’t have any aspirations. My aspirations is to serve.”